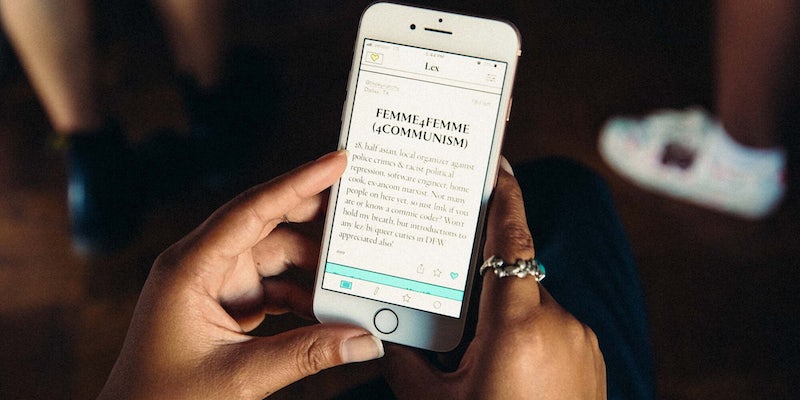 What is Lex, the new minimalist queer dating app?

This app is all text and no selfies.

It’s queer, it’s here, and it’s letting queer folks meet queer folks over beers. Lex, the dedicated mobile app from the Instagram account formerly known as “Personals,” is live on iOS and Android. And it already features (almost) everything you’d want in a queer dating app.

Lex ran a Kickstarter campaign in 2018 for a dedicated app, and the mobile experience finally went live on Nov. 7, 2019. The platform is built by and for any queer users who are not cis men, and everything from platonic friendships to hook-ups to kink arrangements to romantic dates are more than welcome on Lex. It’s a fresh breath if your Bumble profile has been a bit of a dud.

But what exactly is the Lex app, how does it work, and who’s allowed to use it? Read on for everything you need to know.

What is Lex, the minimalist queer dating app?

Lex is a “lo-fi, text-based dating and social app” designed specifically for “lesbian, bisexual, asexual, and queer people.” “Lex is for womxn and trans, genderqueer, intersex, two-spirit, and non-binary people for meeting lovers and friends,” the app’s homepage writes. The app integrates old-school newspaper personal ads with a digital interface that looks familiar if you’ve ever used Instagram.

The name Lex comes from the term “lexicon,” or “the vocabulary of a language, an individual speaker or group of speakers, or a subject,” as Merriam-Webster puts it. Queer lexicon is a running theme on the site, and most ads won’t make sense unless you’re familiar with how lesbians, trans folks, and gender-nonconforming people express attraction and desire.

Lex calls itself “lo-fi” for a reason. The app focuses less on physical appearances and more on platonic, romantic, sexual, and kinky desires. In other words, you won’t find selfies—or personal images of any kind. Posts’ headlines and bodies are character-limited, which encourages short, witty, and creative ads that say just as much about the writer’s desires as it does the writer themselves.

Who can use Lex?

Lex is built for a userbase underserved by the current dating app line-up out there. Previously, the Personals Instagram account didn’t accept ads from “straight cis couples or cis men.” This isn’t explicitly stated on Lex’s marketing copy, but seems to be implied. Lex’s iOS App Store listing states the platform “is for womxn and trans, genderqueer, intersex, two-spirit, and non-binary people for meeting lovers and friends.” The Daily Dot reached out to Lex for clarification about whether cis couples or cis men are allowed to post on the app.

Otherwise, Lex very clearly defines itself an inclusive and intersectional space. According to its rules of conduct, “no transphobia, no racism, no fatphobia, no ableism,” and “no hate speech of any kind” will be allowed. The site has the right to “delete personals or missed connections for any reason,” too. In other words, you can expect racists, trans-exclusionary radical feminists, and nonbinary-exclusionary users to be swiftly kicked out. Users must be 18 or older to use the app.

How did Lex get started, and what was Personals?

Before Lex launched on iOS and Android, the idea started out as an Instagram account known as “Personals.” On Personals, users would wait for a monthly submission window and pay a $5 fee to have their ad posted. The cost was waived for queer people of color, who could also submit an ad at any time.

Personals was founded in 2017 by Kelly Rakowski, a white, queer photo editor from New York City. Rakowski came up with the idea while running the @h_e_r_s_t_o_r_y Instagram account, where she posted content from the Lesbian Herstory Archives. After growing a sizable following, she took a shot at creating a classifieds ad system based on lesbian erotica magazine On Our Backs. By the time the Daily Dot reported on Personals’ history in February 2019, over 4,000 submissions were posted onto Personals’ Instagram.

“The problems on Personals were hiding in plain sight: The ads themselves were overwhelmingly white,” the Daily Dot’s Kris Seavers wrote. “This was obvious because typically, only non-white people will specify their race or ethnicity in their ads. One post was even flagged by a user and removed by Instagram—not for sexual content but for referring to ‘white mediocrity.'”

When a new Instagram account called QPOC Personals emerged to close the gap, Rakowski broke the new page’s rule barring white people from engaging. She warned told the account to “take time to find a new logo and name to clear confusion.” Her response was widely criticized by queer people of color, who pointed out that Rakowski was acting possessive over the Personals format when she did not come up with, nor have the rights to monopolize, a queer classifieds sections herself. The controversy reflected the ways white entitlement festers in white queer spaces and shattered the illusion that a queer space could ever be completely free from oppressive behavior.

Rakowski eventually apologized, admitting she “reacted possessively” to QPOC Personals and prioritized “my own feelings over the importance of creating spaces that are for people-of-color first and run by people of color.” She also vowed to listen closely to feedback and give QTPOC the ability to “engage only with other QTPOC users” on Lex. That feature has not been added, although users can filter their searches for any words they choose (such as “Black” or “Latinx”).

Lex does have features built to protect queer users of color: flagging a post immediately removes it, after which an admin will review an ad before any further action. Lex’s website also says the app “will evolve in response to what works best for our community” and openly accepts “comments, ideas for features, questions, and concerns” via email. It’s a step in the right direction nearly a year later, albeit users will have to wait and see what the future has in store for the app’s most marginalized groups.

How to use the Lex app

Lex has a sleek, minimalist look that’s incredibly easy to use, doubly so if you’re familiar with Personals. But if you’re used to simply swiping left and right on Tinder, Lex may at first feel a little awkward.

Because Lex is still relatively new, it may be difficult to find it on your phone’s app store. Head on over to the official Lex website and choose between an iOS or Android version. After installing, all you need to get started is a phone number or your Instagram account (the latter is recommended so users can still take a look at your selfies). Agree to the rules of conduct, fill out your pronouns (multiple options are available), share your location if you’re comfortable, and give the app your preferred email. Afterward, you’re all set to start.

Unlike Personals, the Lex app is completely free: There’s no monthly window to submit an ad, no fee to place a post, and no wait to see your classified reach the dashboard. Click the pencil button on the footer and write away. Users can choose between a Missed Connection or a Personal ad. The former is your classic cruising and dating ad. Say a little about who you are and what you’re looking for, whether that’s a friend, a lover, or a kinky top. Here’s this reporter’s ad:

Missed connection is, as the name implies, a shot in the dark to see if a person you saw on the subway, at a coffee shop, a concert, or anywhere else was also into you. Write a headline, say who you are, what happened, and what you’d like to do next. Just keep it chill. It is, after all, a missed connection. Here’s a fictional example:

After you share your ad, Lex will post it with a link to your profile which hosts information on your first name, location, age, pronouns, current ads, and a link to your Instagram if applicable. Users can like your post, message you, or bookmark it for later when they get the nerve to reach out. All ads stay online for 30 days, after which they’re pulled from Lex. In order to access an ad, you must have a Lex account on a mobile app. While all ads are posted via a URL, these are inaccessible from a desktop browser.

Lex also lets users search for ads based on specific words and characteristics. Head over to your dashboard and click the slider tab in the top-right to set filters based on keywords, usernames, age, and max distance. You can always reset these, so if you’re looking for a butchy bottom and suddenly decide you actually want a femme top, you can do so with ease.