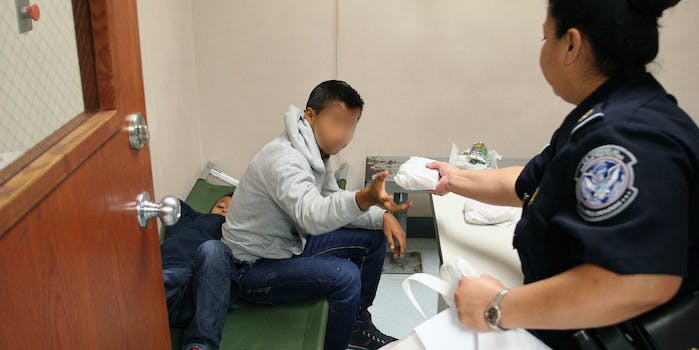 'This place is called a shelter but these kids are incarcerated,' one reporter tweeted.

Last month, the Trump administration and Attorney General Jeff Sessions announced a zero tolerance policy to separate all families entering the U.S. illegally, separating parents from children for a goal of “100 percent prosecution” of all adults. For the first time since that announcement, journalists toured one of the facilities used as child detention centers on Wednesday. Their observations about the “shelter” and the children inside are shocking.

MSNBC’s Jacob Soboroff and ABC’s Tom Llamas were among the first group of journalists to tour a Brownsville, Texas, shelter Casa Padre, one of 26 shelters licensed and operated across three states by private nonprofit company Southwest Key Programs. The nonprofit is part of a network of state-licensed care providers funded by the Office of Refugee Resettlement, which finds sponsors, typically family, for separated and unaccompanied children after they cross into the U.S., or houses them in these shelters.

Recounting their tours on Twitter, the two shared what they saw in the former-Walmart-turned-boys-shelter (the shelters separate the children by gender, meaning that not only are children separated from parents, but from their siblings of a different gender, too).

According to Soboroff, Casa Padre is the largest licensed childcare detention center in the country. It’s been known to approve 1,514 boys from ages 10-17, above its capacity of just under 1,500 children, the Washington Post reported. Boys are supposed to sleep four to a room, but nearly every room has five children, which has been permitted by Texas because of overcrowding, he reported.

Though a majority of children at the shelter were unaccompanied into the country, the child-parent separations have contributed to the overcrowding, Llamas reported. Juan Sanchez, the founder and chief executive of Southwest Key Programs, told the Post that he estimated that five percent of the children housed were separated from their parents, and 10 percent of children across all the nonprofits’ shelters are separated.

Casa Padre staff say they weren’t notified about the zero tolerance policy going into effect, and subsequently the separation of children from parents, and the potential overcrowding at child shelters that ultimately followed. This is all despite having a weekly call with federal officials about policy changes that might affect the shelter, Soboroff reported. This separation policy isn’t new, but a “recommitment” to zero tolerance of unauthorized immigration and the prosecution of people who do so, Immigration Customs and Enforcement deputy director Thomas Homan has said.

Just finished touring Casa Padre where nearly 1500 undocumented immigrant children are being housed. Largest licensed facility in the country & it used to be a Wal Mart. Vast majority of kids came unaccompanied into US but they're nearly at capacity because of family separations pic.twitter.com/5XephoT3xl

The Post reported that children have two T-shirts, three pairs of socks, three pairs of underwear, one polo shirt, and a pair of jeans. They attend school in two shifts, morning and afternoon, because of the overcrowding,

Soboroff tweeted that though the former Walmart contains more than 250,000 square feet, each room in the shelter for the boys is less than 40 square feet large. Children only get two hours a day outside—one for “structured time” and one for free time—with lights out at 9pm nightly. They also must immediately contact police and the shelter communications director if they encounter media.

Staff reportedly told the group to smile at the children, because they feel like “animals in a cage being looked at” otherwise.

Children we saw had a mix of reactions when they saw our group of reporters walk in. Many smiled & greeted us w/ "hola" or "buenas." On average these kids are spending more than 50 days in these facilites-but some are being separated from their parents for more than 6 mos

Starting to get some handout photos from our tour with @HHSGov.

Here’s the Trump mural I mentioned to @chrislhayes inside the shelter for incarcerated child migrants.

Also their beds and the towels they shower with. pic.twitter.com/EPEQ1VGAAF

Soboroff wrote on Twitter that he didn’t “even know where to start” in describing the center, but disclosed that one of the first things seen inside the shelter is a mural of President Donald Trump accompanied by an image of White House, the American flag, and a quote, in both English and Spanish: “Sometimes by losing a battle you find a new way to win the war.”

The Post report that Trump tweeted the quote two years before becoming president.

Sometimes by losing a battle you find a new way to win the war. Don't ever get down on yourself, just keep fighting – in the end, you WIN!

According to the San Antonio Express-News, the mural is one of 20 around the shelter that depict presidents, and has been there since shortly after the shelter’s opening. But the quote was later added, though there’s no indication of when that addition happened. Former President Barack Obama’s mural, meanwhile, contains the quote, “My fellow Americans, we are and always will be a nation of immigrants. We were strangers once, too,” from a 2014 speech.

“Kids would tell me it was an odd image to see, that it scared them. They didn’t like it,” Diana Gomez told the publication. Gomez conducted legal screenings inside the shelter in 2017, and said children told her they saw Trump as “a person who would be a threat to that hope and eventually deport them back to their country where they would face inevitable death.”

And despite the center being called a shelter, Soboroff said the children are incarcerated.

Here are some photos of the boys in the cafeteria.

This is not a school cafeteria.

Hundreds called to eat at a time on rotating shifts.

When I told @chrislhayes it felt like a prison or jail, I was thinking about this. pic.twitter.com/feZI46SPAc

“I have been inside a federal prison and county jails. This place is called a shelter but these kids are incarcerated,” he wrote. “No cells and no cages, and they get to go to classes about American history and watch Moana, but they’re in custody.”

The tour of reporters came 10 days after Democratic Oregon Sen. Jeff Merkley attempted and failed to access Casa Padre on his own. In response to Merkley and his office’s presence outside the facility, Casa Padre staff called the police and referred Merkley’s request to the Office of Refugee Resettlement.

As a result of the overcrowding, the Trump administration anticipates creating tented shelters on military bases, which, according to Soboroff, don’t have to be licensed with a care provider funded by the Office of Refugee Resettlement, such as Southwest Key Programs.