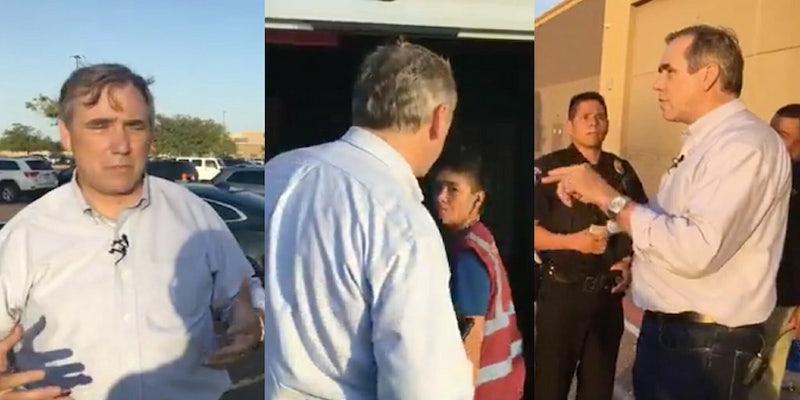 A U.S. senator was denied entry to an immigrant children’s shelter in South Texas on Sunday, where he was told hundreds of immigrant children were being housed after being separated from their families at the U.S.-Mexico border.

During a 25-minute-long Facebook Live video of the encounter, Democratic Oregon Sen. Jeff Merkley attempted to be allowed inside the Brownsville “Casa Padre” facility. The shelter is one of several shelters contracted by private nonprofit organization Southwest Key Programs under the Office of Refugee Resettlement (ORR).

I was barred entry. Asked repeatedly to speak to a supervisor—he finally came out and said he can’t tell us anything. Police were called on us.

Children should never be ripped from their families & held in secretive detention centers. RT if you agree this is WRONG. pic.twitter.com/GVCuXNjR8d

During the live feed, Merkley is seen attempting to speak to several people at the facility and is consistently told to call a certain number for a statement, before he ultimately has the police called on him. He said that while he contacted ORR and Southwest Key about his visit the week prior, he was told he wouldn’t be able to visit the facility.

“We should be told ahead of time if anybody is going to come and visit us,” a facility worker says in the video. “Like I said, I’m not going to give a statement right now.”

Merkley later tells an officer that he was told a supervisor would speak to him, but was later told the supervisor cannot, since they couldn’t give a statement.

I’m at an immigration detention center where children who have been separated from their families are being held. Trying to get inside to get answers. Follow live >>> https://t.co/CXDjYAFIcB #FamiliesBelongTogether #KeepFamiliesTogether

I’m going to try to enter a facility in Brownsville, TX run by the Office of Refugee Resettlement. I am told that this former Walmart may currently be housing hundreds of refugee children who have been separated from their parents.

Shelters such as the one Merkley attempted to access house undocumented minors, oftentimes children who came to the country by themselves. Children are placed in shelters by ORR after they are processed at immigrant detention centers and cannot find relatives or other sponsors to live with while their cases for asylum or otherwise are being processed.

In May, Attorney General Jeff Sessions announced that immigrant families arriving in the U.S. would be separated at the border, with children being separated and processed apart from parents, and parents charged with attempting to enter the U.S. illegally. According to the Department of Homeland Security (DHS), from October through May, 700 children had been separated from their parents.

Despite this newly announced policy, Immigration Customs and Enforcement deputy director Thomas Homan said at the time that the policy wasn’t new, but was instead something DHS was re-committing to. Adults had been previously separated from children if border patrol couldn’t determine if they were the parents of the children, or if the adults were prosecuted for a crime.

“I want to be clear. DHS does not have a blanket policy on separating families as a deterrent. There is no new policy. This has always been the policy. But you will see more prosecutions because of the commitment to ‘zero tolerance’ of illegal border entries,” Homan said.

Merkley’s visit appears to be part of a larger effort of his office to draw attention toward immigrants, specifically family separation. In a Facebook Live video taken earlier that day, Merkley said he visited an immigration processing center in McAllen, Texas, a Texas-Mexico border town an hour west of Brownsville.

Separating children from their parents is cruel, immoral, and unacceptable. I’m on the border in McAllen, TX, demanding answers about how children are being treated in our immigration system. WATCH LIVE: https://t.co/YselhGUM3L #FamiliesBelongTogether

This asylum seeker asked me, “Is there a chance they will separate me from my family? That’s what worries me. We don’t want to be separated.” pic.twitter.com/Wf1Oir9HXd

Democrats have criticized the practice of separating immigrant families, writing in a letter to Homeland Security Secretary Kirstjen Nielsen and Sessions that it is “antithetical…to American values [and] basic decency and humanity.”

Inquiries sent to the Office of Refugee Resettlement, Southwest Key Programs, and Sen. Merkley’s office were not immediately returned.

Update 9:09pm CT, June 4: A spokesperson for the Department of Health and Human Resources’ Administration for Children and Families told the Daily Dot in a statement Monday that Merkley was denied access to the children’s shelter after arriving “unannounced.”

“Senator Merkley should respect the [immigrant children] program and engage in the appropriate processes, as many of his colleagues have done before him, to visit ORR facilities,” the spokesperson said. “We would welcome him to engage in that process so that he may visit the facility to make headway on this important issue, rather than just headlines.”