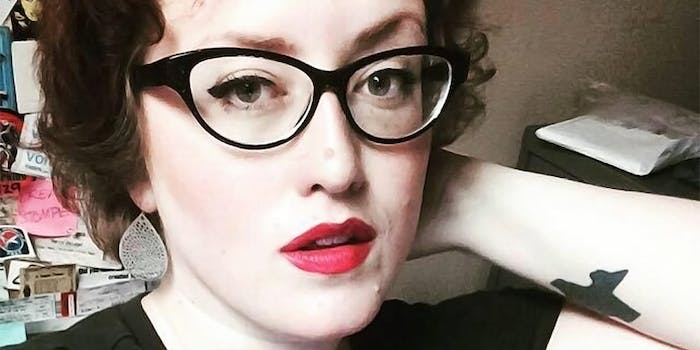 For the past few years, Kristen Walker Hatten has been best known for her activism as an outspoken anti-abortion “feminist.” These days, though, that oxymoronic title might be outdone by something even more controversial: white nationalist.

“I do see that Europe and the U.S. are becoming… well, not European,” Hatten told HuffPost. “No people should be excited to become a minority in their homeland. It is contrary to human nature. I wouldn’t expect it of any race and I don’t think it should be expected of whites.”

Hatten’s views may sound similar to those of President Donald Trump’s supporters, but prior to the 2016 election, she supposedly felt immense disgust toward the president. In an opinion piece for the Dallas Morning News called “I’m a feminist and I’m glad Trump won,” Hatten called out Trump’s “repugnant chauvinist comments.”

“I found Trump creepy, gross and tacky,” Hatten said in the piece. “I focused instead on his habit of trading up for a younger, hotter wife every couple of decades and his repugnant chauvinist comments.”

However, despite any personal feelings she may have had toward the president, she supported his win. And since then, she has also supported and espoused white supremacist rhetoric online and sees herself, like Richard Spencer, as an “ethnonationalist” (she told HuffPost that she does not identify as a white nationalist or white supremacist).

In the wake of these comments and subsequent backlash, the Dallas Morning News confirmed yesterday that it will “not publish any future pieces from Kristen Walker Hatten.”

I knew her (not well) but broke off contact after the election. She'd started moving to the right but I'd not have predicted this. :/

How is The United States a "European" Homeland? The root word is Europe so if that's where you want to esthablish your identity then move there.

This is me expressing my surprise at reading this: pic.twitter.com/X2Qgj0ecTO

We will not be publishing any future pieces from Kristen Walker Hatten. She did contribute a few pieces for us in 2016.

So, you might ask, how could someone so disgusted by Trump’s behavior ultimately turn into a far-right supporter? Well, it’s simple. Hatten may have seen herself as a “feminist,” but the seeds for her white nationalism were always there, waiting to grow.

For one, Hatten previously served as vice president for New Wave Feminists, a self-described “anti-war, anti-death penalty, anti-torture” and “anti-abortion” “feminist” organization. This didn’t bode well with the Women’s March, which originally listed New Wave Feminists as an official partner, but later called their inclusion an “error” after online backlash.

Our statement regarding press today: pic.twitter.com/z1y9cfFFvY

Also, in Hatten’s post-election piece for the Dallas Morning News, her racism was in plain sight—if not coded in the speak of “what happened to the America I once loved?” She complained anti-Trump protesters decided to “burn their own neighborhoods to protest the results of a democratic election,” argued New Orleans was “defiled by vandalism” with “DIE WHITES DIE” spray-painted over a “public monument,” and advocated for “the curtailment of illegal immigration, which I believe is a crucial issue of national defense.”

All three of those responses immediately fly in the face of intersectional feminism. They treat undocumented Americans like subhuman enemies and act as if white Americans are being targeted by “rioting” people of color. She also failed to mention that the “public monument” in question is a Confederate statue in a city that has since worked tirelessly to take down statues erected as part of the South’s anti-segregation legacy.

Less than a week after President Trump was elected, Bitch Media’s Margaret Jacobsen pointed out that white women largely voted for Trump and therefore helped him secure the American presidency. Yet many white feminists refused to accept or address the fact that fellow white women voted for him because they aligned with his racist ideologies. This is in part because doing so forces white feminists to accept that they too benefit from a movement that never forces them to challenge their own biases and racist beliefs.

“I watched them complain, and blame, and refuse to recognize that there needs to be a change to what we call feminism,” Jacobsen wrote in November 2016. “It was peak white feminism, doing what it does best, looking out for the white female while stepping over and on top of women of color.”

In feminist movements that prioritize and raise up women of color, women like Hatten are told to change or leave. But white feminism makes room for conservative-leaning ideologies. It argues that pro-choice and “pro-life” views are just contrasting political dogmas and that everyone’s voice across the political spectrum should be heard.

This puts the most vulnerable women—from trans women to sex workers to women of color—in grave danger because it gives white women room to argue that there’s nothing wrong with, say, disparaging undocumented Americans or supporting racist policing. These are things they have never faced and therefore aren’t a priority to them. White feminism is “colorblind” in the worst way possible: It cares only for white women and sets their experiences as the default.

Good morning everyone except the "anti abortion, white ethnonationalist feminists" that continue trying to co-opt emancipatory language to advance a rancid and violent ideology. pic.twitter.com/oF9I4jeNMr

while simultaneously interrupting ME

This is the biggest harm that white feminism, does.

It tells white women that their feelings are more important than facts.

It tells white women that anyone who corrects their behavior (no matter how politely) is a negative stereotype.

Hatten chose not to center others’ struggles before what she saw as her own. But other white women don’t have to follow down her same path. They can listen to feminists of color. They can support Black and brown women. They can resist white nationalism. Because if feminism isn’t willing to put women of color first, after centuries of being oppressed, then expect more and more white women to abandon feminism altogether and join the far-right.