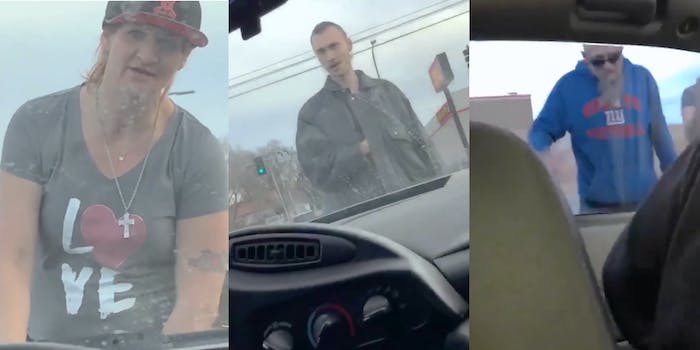 A mob tried to stop the family from driving away in their own car.

New videos of racist acts and irate Karens are seemingly cropping up every day.

The latest of these viral moments comes from Spokane, Washington. A man named Lee Allen was headed home from a trip to Walmart with his two kids when a woman attempted to stop his car. The resulting argument led to a mob forming outside the vehicle, as white bystanders unquestioningly believed the woman, who claimed the car was stolen.

Allen shared a video of the incident to social media, where it quickly caught people’s attention. As the video begins, a white woman can be seen blocking Allen’s car in a parking lot near a Mattress Firm. As Allen tells the woman to move, she repeatedly claims the vehicle is hers.

Allen almost manages to speed away from the woman but finds his car blocked by another pedestrian. He is forced to stop or run the stranger over. As more people gather around the sides of the vehicle, Allen’s daughter can be heard telling her brother to call the police.

Outside, the woman continues to claim that the family is in her car. The man blocking the vehicle stands ominously by with one hand hidden in his jacket. The move feels threatening, as it hints toward a possible concealed gun, but no gun is ever shown in the video. All the while, the car is forced to remain still, as even more people gather around it. By the time a man in blue, identified by news outlet KHQ as Lawton Miller, reaches the vehicle, there appear to be at least five people surrounding it.

Miller, apparently summoned by the woman’s continued claims that the car is stolen, attempts to open the driver’s side door. Allen quickly interrupts this attempt, slamming the door on Miller and locking it. This move enrages Miller and many of the people around the car, and their attempts to get inside become far more frightening for the family inside. Allen’s daughter begins to cry as Miller, along with several other white men, begin hammering on the windows and screaming at Allen to “get out of the f*cking car.”

The situation continues to escalate as Allen searches for a route to safety. He begins edging around the gathered pedestrians, his terrified daughter weeping in the back seat. When he finally manages to find a way around the mob, one of the men jumps on the hood. Another appears to throw a bike at the vehicle. The man on the hood remains there as Allen, on the phone with police, attempts to get to safety.

Soon, Allen’s daughter realizes that Miller is following them on a motorcycle. The video ends with him still tailing them from an uncomfortably close distance. Allen’s daughter is near frantic by the end of the three-minute clip.

Following the video’s rise to viral status, local news station KHQ spoke to Miller. In an interview, he claimed that the entire situation was a misunderstanding. He told reporters that he would have let the situation rest had a man not jumped on the hood of the car.

“This kid jumps on the car. What do I do now? I’ve got to get this kid off the car,” Miller told KHQ. “I don’t know if this guy knows it who’s driving this car, (but) if this kid falls off and he runs over and kills that kid, he’s going to prison for murder. He’s no good to his family anymore.”

Most online viewers of the video were unconvinced by Miller’s explanation. Commenters also noted that the woman claiming ownership of the car was on a bicycle.

“These dudes didn’t question why she is on a bike when her car just got stolen,” one commenter noted.

During the entire altercation, Allen noted that the safety of his children was at the forefront of his mind.

“I knew I was going to keep my kids protected no matter what,” he said. “If all else fails, I could just step on that gas pedal and shoot out like a rocket somewhere, but at the same time I didn’t want to hurt anybody.”

The Spokane Police Department did not immediately respond to the Daily Dot’s request for comment.