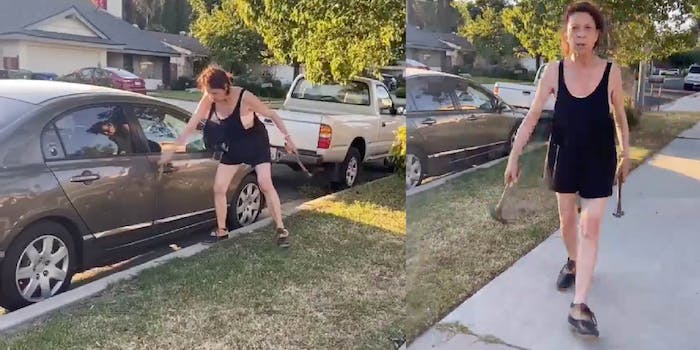 The video ends with her in a bush.

A Los Angeles woman was caught on video destroying property with two hammers in an apparent racist attack.

At the beginning of the short video, the woman, being called both a “Karen” and “Becky,” repeatedly smashes one of the hammers she is holding into the side of a car.

“I got you on video—that you’re destroying my car,” a neighbor who is recording tells Becky.

Becky then approaches the neighbors. It is unclear how many neighbors are watching, as they are off-camera for the entirety of the video. “Get the f*ck out of this neighborhood, you f*ckin’ shit,” she tells them. “Call the police.”

Becky then seemingly walks back to her house.

As one of the neighbors calls the police, Becky can be seen walking back toward their property, still with a hammer in each hand, attacking their recycling and trash cans before toppling one over.

“Go back to Mexico,” she screams at them, while one is seemingly on the phone with the police.

In a video featuring part two of the incident, Becky now has a water hose, and a person is holding her by the hair. TMZ reports this person is a nearby neighbor.

“Tell me again, b*tch. Tell me to go the fuck back somewhere, b*tch,” the neighbor says. “Now turn that motherf*cking hose off, b*tch, before I shove it up your f*cking a**.”

Becky ends up in a bush.

“I’m not a mothf*cker to be played with,” the neighbor says. “Motherf*cking racist b*tch.”

Edy Perez, the man who posted the videos, told TMZ he and his roommates live next to the woman. He wrote on Twitter that he wasn’t even home when the attack happened. She has reportedly used racial epithets against them before, but they usually ignore her. Perez went on to say she randomly attacked their car on Wednesday.

She was reportedly arrested and released that same day.

Update 2:38pm CT, June 16: Perez told the Daily Dot “this is the first time” the woman has gotten violent. They haven’t yet pressed any charges but are working on speaking to a lawyer.

A GoFundMe was created to help pay for the car’s damage, and it has already surpassed its goal of $10,000.

“I don’t have full coverage insurance for my car so anything will help,” Perez wrote on the campaign. “Help fund me for repair or lawyer fees. Really anything helps.”