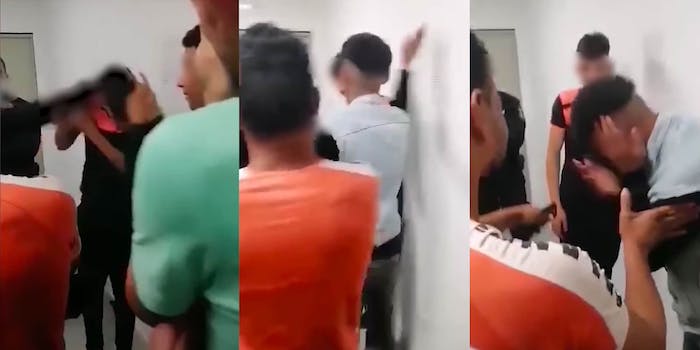 It was their 'punishment' for trying to escape.

Video of an Italian police officer forcing Tunisian migrants to slap each other as punishment for trying to escape is going viral.

InfoMigrants reported that the officer has now been suspended from duty, and the incident is being investigated for abuse of correction methods.

The migrants were being held at a reception center in the Contrada of Ciavolotta in Agrigento as a part of the coronavirus safety measures.

In the video, which was presumably filmed by one of the migrants, the officer is seen yelling at a migrant.

“You’re a guest and you have to respect the law; now get on your knees and slap each other,” he yells.

The incident was brought to the attention of the Agrigento police department on June 18.

Alessandra Vella, the Agrigento preliminary hearing judge, has approved getting testimonies from five migrants who were involved.

After the Tunisian consul in Palermo and social worker Jaballah El BKhairi were made aware of the situation, BKhairi traveled with attorney Leonardo Marino to the Agrigento police department to get information about the case.

“The consul, after the big media hype around this case, wanted to take action on an institutional level to acquire information. We had a very cordial first meeting with the police commissioner’s chief of staff; we will try to enter the proceedings,” Marino said, per InfoMigrants.