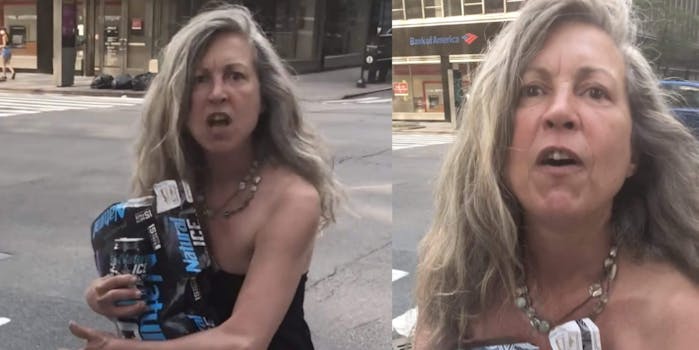 The Yale University student said she was just walking down the street, wearing a Black Lives Matter shirt.

A white woman verbally attacked a Black student in New York, repeatedly calling her the N-word, an “ape,” and making monkey noises.

Kathryn Graves, a student at Yale University, shared a video of the incident to Facebook Saturday.

“I was walking down the street with my headphones in and a BLM shirt on, and didn’t even realize she was yelling at me until I stopped my music,” Graves wrote. “I silently recorded up to the very end.”

In the video, the woman, who is holding a pack of Natural Ice beer, refers to Michelle Obama as “fucking ape wife.”

She goes on to make monkey noises and repeatedly scream, “[N-word] ape.”

“What’s the matter you [N-word] ape? You got time to do your fucking pink-ass hair you [N-word] Obama fucking ape?” the woman continues.

As she finally begins to leave, Graves echoes a chant that went viral in early June, saying, “You about to lose your job.”

It’s unclear if the video that was allegedly removed by Facebook is the same video as Saturday’s. The Daily Dot has reached out to Graves.

In the follow-up post, Graves said the woman might be someone in need of help, but that shouldn’t excuse her racist behavior.

“She may be homeless, and possibly mentally ill, [in] which case she needs support,” she wrote. “HOWEVER, neither of these causes or excuses racism, and for that reason there needs to be repercussions. She got in my face, and if this happens again, and things escalate, she could harm someone or herself.”

Graves said she has received “leads” about the woman’s identity, but it has yet to be revealed.

“I have never experienced something that was that belligerent and blatant,” Graves told NBC News on Monday. “My mindset was ‘Keep recording and brace yourself in case she gets violent.”

Commenters expressed their anger over the incident while applauding Graves for her calm demeanor.

“The restraint to calmly record her as she kept going on with racist diarrhea of the mouth is beyond commendable,” one user wrote. “Sorry this was a situation you had to experience.”

“Wow your self control is everything I would’ve Punched her in her face and went about my Merry day,” another said.

The racist incident occurred a day after Juneteenth, which organizers say had a historic turnout of people who celebrated this year.