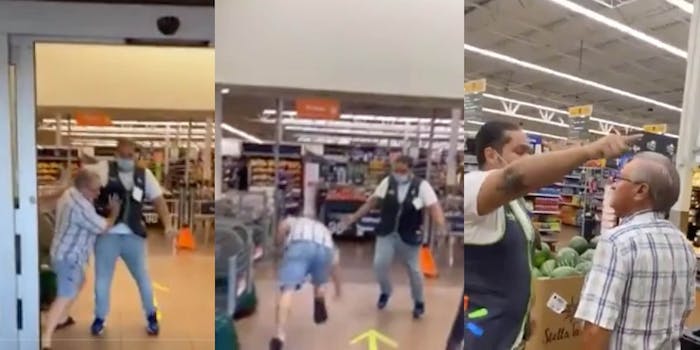 The employee really puts in the work to block the man from entering the store.

An unmasked customer continually tries to fight his way into a Walmart after an employee told him he must wear a mask to shop.

The decision to wear a mask has increasingly become a political statement. While health guidances recommend people wear a mask for mutual protection, some refuse. Some say that the requirement to wear a mask is a violation of their freedom and/or would be buying into a public health threat they think is exaggerated or nonexistent.

Throughout the 45-second video clip, the man shoves the masked employee who is doing their best to block the customer from entering the store.

The employee really puts in the work to block the man from further entering the store and shopping without a mask.

A few seconds into the video, the man pushes the employee so hard that he himself loses balance and falls to the ground. The person recording is clearly heard laughing.

“Bruh, these folks is trippin’,'” the videographer says.

After pushing the employee into a produce display, the employee points to the door and firmly says, “I need you out.”

A few other employees gathered a few feet away. One pulls out their phone, possibly calling for security or some other form of backup.

The customer does not heed the demand and gets halfway down an aisle before being blocked yet again. At this point, he seemingly gets into a fighting stance while the employee has their arms splayed out starfish style.

“Yo, the man threw his jab bruh. Just get a mask,” the person behind the camera yells out before the video cuts off.

The video, posted by Reddit user u/NoDopeonSundaes, has more than 30,000 upvotes and 2,000 comments. It’s unclear whether the person who uploaded this video is also the one who recorded it.

Many of the top comments are people getting their jokes off about the man and calling him entitled.

“Old dude didn’t get the rolled back prices, but he got rolled back,” wrote u/0wen_Meany.

“It’s so mind boggling to me that these people think they have an absolute right to shop in privately owned stores. They seem so determined to spend money at a place they are clearly very angry at,” u/_jefe_jefe commented.

Others expressed worry over the employee’s job, speculating that he could get fired for getting in an altercation with a customer, even if the customer was the one who started it.

“I worked AP at Walmart for 2 years. This employee is 100% getting fired. Although [they] didn’t do the initial pushing [they] put himself in a situation where an altercation is likely, because of this Walmart will assign equal blame to both parties,” u/Jordan_1424 wrote.

A few say the customer assaulted the employee and that charges should be pressed against the customer.