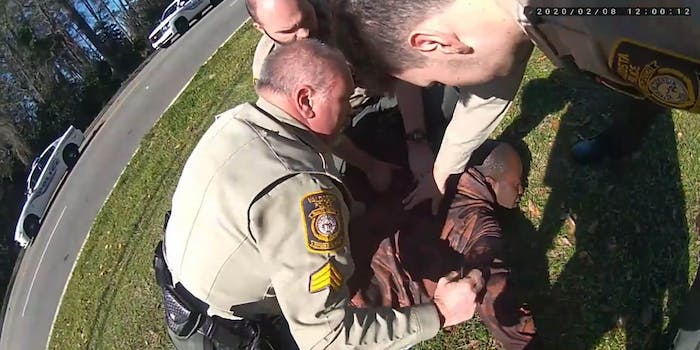 A Black man has sued a Georgia city and its police department after an officer mistook him for a suspect and broke his wrist in February.

Antonio Arnelo Smith filed the lawsuit against the city of Valdosta, Georgia and its police department on June 19, alleging the officers violated his constitutional rights through unlawful detention, excessive force, and more, the USA Today reports. Smith is seeking $700,000 in damages.

According to the Valdosta Daily Times, police responded to a report of panhandling outside of a Walgreens on Feb. 8. A patrolman then approached and identified Smith, who said he had been waiting at the Walgreens’ Western Union for his sister to wire him money.

Police body camera footage from the arrest shows the patrolman telling Smith he is investigating “suspicious activity.” Smith shows his ID and insists he has done nothing wrong and “has been around cameras.”

At that point, another officer approaches Smith from behind. He puts Smith’s hands behind his back, bear hugs him, and body-slams him to the ground. Smith lays facedown on the ground and repeatedly screams, “Oh my God!” as four officers restrain and handcuff him.

At this point, the officers realize they have probably broken Smith’s wrist. They tell him to relax, remove the handcuffs, and inform Smith that a warrant has been issued for his arrest. Then, the patrolman who initially approached Smith tells the other officers that they got the wrong man.

“This was another guy,” the patrolman tells the other officers. “The guy with the warrant’s over there.”

All four officers look stressed as they realize their error. They try to calm Smith and tell him to limit his movement to avoid hurting his wrist more, and they tell him an ambulance is on the way.

The bodycam footage corroborates the claims made in Smith’s lawsuit, which reads, “From the moment Mr. Smith was slammed to the ground until he walked away, he cried and screamed in agonizing pain.”

The city of Valdosta said in a statement on Monday that it had not yet reviewed the lawsuit and could not comment on the details of the case, but it presented its own summary of Smith’s arrest. The statement claimed that an officer “approached [Smith] and advised him to place his hands behind his back,” at which point Smith “did not and began to resist by pulling his arms forward and tensing his body.”

In reality, the officer approached Smith from behind and locked his arms behind his back in a bear hug before he instructed Smith to do anything. He then body-slammed him to the ground, which the city referred to as a “physical control technique to place the subject on the ground so handcuffs could be applied.”