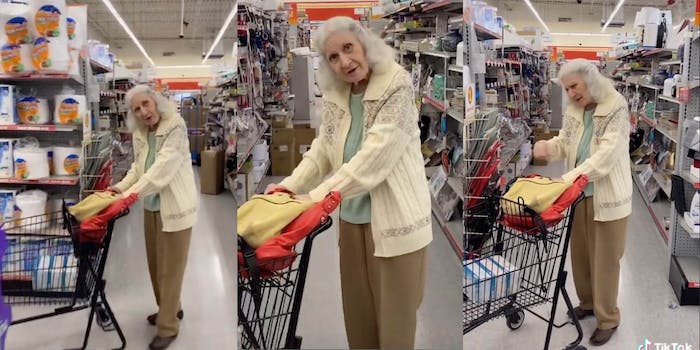 An elderly Karen asked a Black man to wait until she left the store to rob it. He was just shopping

A TikTok captured the racist incident.

In a viral TikTok, a Black man is seemingly going about his business and shopping when an older white woman assumes he’s there to steal.

This video is just one of so many racists incidents that have been caught on camera. More and more people are documenting these situations as a means of protection in case their aggressor denies or spins what happened (à la Amy Cooper).

The man starts recording the woman and asks her to repeat what she just asked him.

“You asked us was we gonna do what?” the man says.

“Rob the store,” the woman replies with a straight face.

When the man asked why she thought that she asks him, “Aren’t you going to do it now?” and says that she “just wanted” him to wait until she purchased her items and left.

The video was uploaded by a TikToker by the name of Agustist King with the hashtags #racism, #blacklivesmatter, #sad, #wow and #becareful. It has 2.4 million views and more than 11,000 comments.

This interaction is happening at the same time that people across the nation protest against the police brutality, systemic racism, and discrimination Black people are continually subjected to. Protests were sparked by the death of George Floyd, a Black man who died after a white officer pressed his knee of Floyd’s neck for nearly nine minutes.

Plenty of people, including popular TikToker Vanessa Simeon who’s known for her gas station series, called the woman out or left other comments in support of King.

“Old people forget everything except apparently how to be prejudice,” @toninocash wrote.

But there are also a slew of comments in defense of the old woman saying she’s “just scared” because of what she’s seen on TV about the protests.

“The hypocrisy is amazing with these comments. So we giving Betty White a pass because she’s old? But is she was a few years younger we’d be marching?” wrote TikToker Brandon Keith Mincer.

“People who are saying poor old lady 🤡. What about the guy minding his business and having being accused of something he didnt do,” @stefant78 commented.