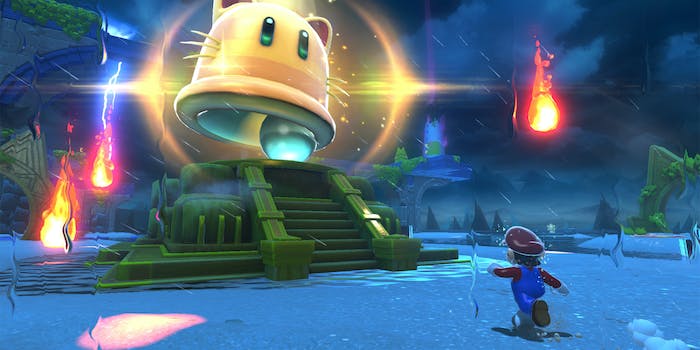 Cat's out of the bag!

Ah, the Wii U. It never really had a chance to shine, despite having quite a few hits under its belt. Luckily, overlooked Wii U hits are getting ports to the Nintendo Switch. The latest of these is Super Mario 3D World + Bowser’s Fury.

The once Wii U exclusive 3D platformer is great whether you’re playing alone or with friends. It’s also the first 3D Mario platformer that’s built with friends in mind. Up to four players can save the day together, or get competitive in a race to the finish.

Take control of Mario, Luigi, Peach, and Toad, who all have different abilities and play styles. Mario, as usual, is standard with no-frills (not that that’s a bad thing). Luigi jumps extra high, but he’s floaty and occasionally difficult to control. Peach is slower and doesn’t jump as high as her male counterparts, but she makes up for it be being able to float above it all. She’s great for beginners. And then there’s Toad, who trades much of his jumping prowess for pure speed.

Whichever hero you pick, you’re guaranteed some seriously satisfying platforming. After all, power-ups like the Mega Mushroom, Tanooki leaf, Fire Flower, and of course Super Bell make this one of Mario’s most addictive adventures.

Plus, there’s the built-in expansion game Bowser’s Fury. Cat Bowser has gone gargantuan, so Mario must make unlikely allies with Bowser Jr. in an all new adventure. Play alone, or have a friend take control of the royal brat, who comes armed with his trademark clown car and magical brush.

This trailer shows off everything you need to know about the upcoming Mario platformer.

The best part of finally learning all the cool features included in this Nintendo Switch revamp is we won’t be waiting much longer to play it. The game releases Friday, February 12 and is available for pre-order on Amazon for $59.99.