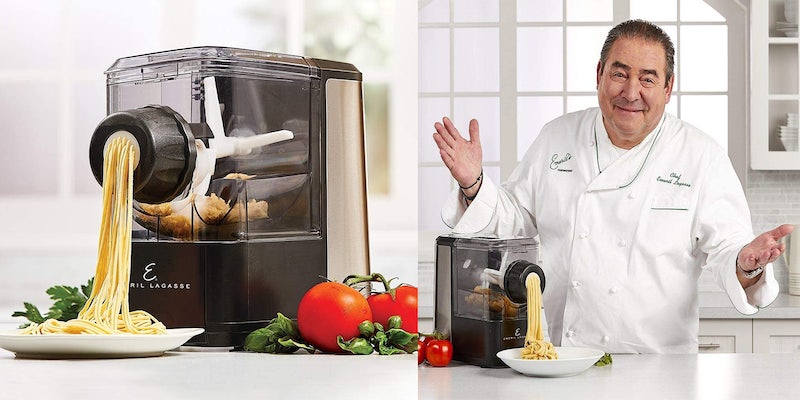 If you were even halfway sentient from the years 1997 to 2010, there was one cable personality who was, quite literally, explosive. I mean, the dude’s catchphrase was “BAM!” The limelight has dimmed on the chef that put Food Network on the map, but he’s gone the Wolfgang Puck route and is putting his name on kitchen appliances. The Emeril Lagasse Pasta and Beyond is one such gadget, but it’s so much more. It’s also a fantastic kitchen multi-tasker.

What is the Emeril Lagasse Pasta and Beyond?

Emeril has slapped his name on a handful of products from pasta sauce to air fryers. While the gadgets bearing his name are technically “As Seen on TV” products, they’re available in many retail stores and online marketplaces including the big one.

The name is pretty apt at telling you exactly what it is. It’s a pasta machine, yes. But it’s also a slow juicer and a frozen dessert machine. If you upgrade to the deluxe model, the machine also becomes a meat grinder, slicer, and shredder. Here’s a peek at what you get with the standard model.

Emeril Lagasse Pasta and Beyond specifications

Emeril Lagasse Pasta and Beyond Review: Is it worth it?

Have you ever eaten fresh pasta? It’s revelatory. The problem is, unless you have a nona handy, making it is a day long excursion. I’m happy to make it, but because it takes hours of labor, it’s something strictly for special occasions. Suffice to say, making a batch of noods in as little as 15 minutes with almost zero actual work appeals to me. Still, life is full of things like low carb diets, sub-prime mortgages, and online dating apps that are bright and shiny on the outside, but under scrutiny, make you pray for a swift death.

Making a batch of pasta follows the same procedure whether you’re making tagliatelle or macaroni. The machine comes with two measuring cups, one for wet ingredients and one for dry. You can make either one or two batches at a time, with one batch serving about four people.

I watched a few how-to videos available on the product’s YouTube page to make sure I got the technique right. It takes one scoop of dry ingredients and a measurement of wet ingredients for a single batch. Once a batch is set, the machine begins kneading the dough. Halfway through, the machine kneads the other way and extrudes the pasta in the process.

Because this was my first time using a fully automated pasta machine, I figured my first time would be rocky. And at first, it was. The pasta was extruding much too slow and had an almost Play-Doh texture to it, so noodles began to stick together. I did what videos suggested, shaved off the noodle dough, put it back in the machine, and added a little more flour to get it right.

That’s all it took for me to get a few nests of tagliatelle going. From then, I knew more or less what the dough should look like to extrude properly. I’m happy to report that I caught the bug and was soon off to the races. Here are a few things I made in a single week of use.

Then there’s the question of all the attachments including the slicer, shredder, and juicer. All worked well, especially the juicer, which made quick work of a bag of oranges that were about to turn. I was afraid of burning out the motor when I used the shredder, as the block of white cheddar I bought around Christmas time had become almost as dry as parmesan. Luckily, it shredded it with aplomb. Heck, it even made quick work of some actual parmesan.

The meat slicer worked great too, though I would have killed for a tube attachment for sausage making. Still, it grinds meat quickly and with little effort so I can’t knock it down too much.

There are machines that make a single thing, and usually do it very well. However, there are usually caveats to using some that you simply have to ding them for. The electric pasta rollers for my Kitchenaid stand mixer work fine. But they’re annoying as hell to clean, and actually using them to knead and roll out sheets of flour is still incredibly laborious. Then, at the end of the day, you have two clunky pieces of metal that don’t do anything else but roll out pasta.

Even after using this lovely machine, I wondered: I bet cleaning it is going to make me want to hurl myself into a volcano. After cursory reading of the manual, I was overjoyed to see that every piece on this machine (minus the motorized base) is 100 percent machine washable. I will say that picking out pieces of dough from the pasta dies after use is a little annoying, but it’s a pleasant penance to pay for quick pasta.

The manual recommends making a double batch and the freezing nests for long term storage. This works incredibly well. Macaroni made on Monday tasted just as fresh on Friday, and all it took was a few more minutes of cooking time straight from the freezer.

The Emeril Lagasse Pasta and Beyond is a pasta lover’s dream (even though the name is a bit corny). The eight different pasta shapes offer quite a bit in the way of possibilities. Then there’s the lasagna extruder which makes flat sheets of dough. Samosas, perogies, tortelini are just a few of the countless dumplings that can be made in minutes instead of hours. And because it’s also a juicer, frozen dessert machine, slicer, shredder, and meat grinder, it’s worth giving it a dedicated space on your countertop. .

Pasta machines aren’t for everyone. If you’re not noodle crazy, dropping cash on such a machine isn’t exactly the most prudent thing to do. If you eat pasta at least a few times a week, I’d give it serious consideration. Unlike other pasta machines, it does more than simply spit out noodles. The noodles it does spit out, however, will likely ruin the boxed kind forever. So fair warning on that.

The Emeril Lagasse Pasta and Beyond is available on Amazon for $219, and comes with the standard machine as well as the slow juicer/frozen dessert attachment. For a few dollars more, you can upgrade to the deluxe model, which comes with a shredder, slicer, and meat grinder.