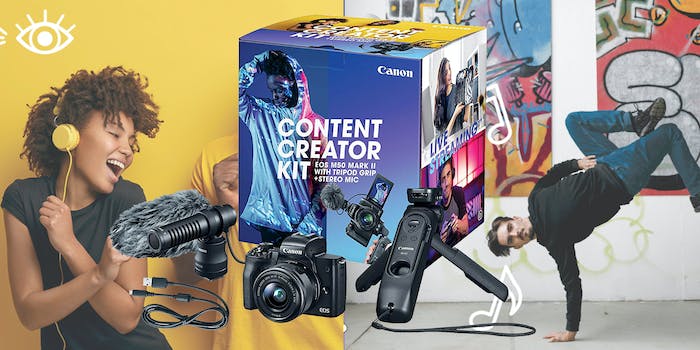 This content creator kit is your ticket to internet fame

If you’re anything like me, you’ve sat slumped on your couch watching YouTube and thought “I could do that!” in between Diet Dr. Pepper burps. After all, the content creation space is massive, encompassing everything from TikTok chefs, to Instagram beauty influencers and even Fortnite Twitch champions. What do all of the big creators have in common? Clear visuals and crisp audio. If you’re looking for an internet stardom starter kit, this Canon EOS M50 Mark II Content Creator Kit review may reveal that it’s right for you.

If the name “content creator kit” sounds familiar, it’s because this package bears the same name as a previous Canon offering. In fact, I reviewed it a few months ago because it rendered great things.

Instead of an SD card packed in with a camera and a tripod grip, this camera package comes with a microphone to ensure that the sound it captures is on par with the video quality. Let’s take a closer look at all three of the products in this content creator kit separately.

This camera is the star of the Content Creator Kit. It’s a mirrorless camera with a zoom lens, flexible LCD touchscreen, and HDMI output. It shoots gorgeous photos, yes. But it also records in 4K, which makes it a great camera for streamers.

The camera also has Wi-Fi capabilities that connect to either a phone app or a Mac/PC app which allows you to use the camera to livestream. Better yet, the LCD screen is flexible, so you can ensure that you’re looking your best from every angle. In fact, the camera allows you to shoot directly from the camera to YouTube. Convenient, to say the least.

Aside from its space-age content creation capabilities, it’s just a solid camera. The 24.1 Megapixel lens takes beautiful, and perhaps more importantly, huge photos. You’ll get tons of detail, whether you’re photographing some blooming morning glories, a summertime slice of cherry pie, or your spunky cat Jodah.

This directional microphone slides into the top of the camera and captures audio much better than the built-in microphone ever could. If you’re camera shy, rest assured that the microphone points forward and back, depending on how you decide to affix it to the camera. There’s even a removable windscreen to keep background noise to a minimum.

I will spare you the proof, but to try out the microphone’s fidelity, I recorded myself singing Bette Midler’s “Wind Beneath my Wings” from her 1988 hit, Beaches. Was it bad? Yes. But the recording quality was crisp, and required no post-production edits.

Aside from doing exactly what it’s intended to do, using the mic couldn’t be more simple. Simply plug and play.

This little tripod was one of my favorite things about the original content creator kit. It works with any mountable camera under 1kg. The mount at the end of the tripod swivels just shy of 180 degrees. Just under it, there’s another swivel which allows for full 360-degree movement, with locking positions at each of the cardinal directions.

When it comes to content creation, this tripod grip works whether you’re in a static situation, say, filming a cooking video, or simply gabbing it up for a vlog. There’s even a wireless remote that affixes to the shaft, so you can shoot remotely. Or, if you wish, slide it out of the tripod and operate it from up to 16ft away. Even if you don’t decide on the content creator kit as a whole, it’s a fantastic accessory. In fact, I use mine with my iPhone 12.

Canon EOS M50 Mark II Content Creator Kit Review: Is it worth it?

A kit is only as good as the sum of its parts. And like the first content creator kit, each part in this redux is fantastic alone. The EOS M50 Mark II mirrorless camera is a great stand-alone device for stills and video. The Canon Stereo microphone not only brings polished fidelity to videos shot with this kit, but a handful of other mirrorless and DSLR Canon cameras. And then there’s the Tripod Grip. It’s a tripod, yes, but it’s also the best remote selfie stick money can buy.

Combined, it’s got everything you need to become the next YouTube or Tik Tok star. It’s a fantastic investment if you’re looking for a great out-of-the-box kit for content creation. The second iteration of Canon’s Content Creator Kit is available on Amazon for $899.