Here’s how Yik Yak baited colleges into loving it

The gossip app hit SXSW to talk about how it won American college kids over and its plans to handle moderating the network.

Yik Yak is doing it backward. While most social apps drum up interest in Silicon Valley and move outward from there, the founders of the anonymous college-specific social network started with what they knew: Furman University, a private Baptist college with about 2,600 students.

From their their Greenville, S.C. alma mater, Yik Yak cofounders Tyler Droll and Brooks Buffington expanded their mission to connect students at campuses across the southeast. “San Francisco is the last place we conquered,” explained Buffington.

“As long as one person forwarded the email to their organization, we would take over a school in a day.”

“Every Tuesday, we would sit down and send out thousands upon thousands of personalized emails,” Buffington described in a panel talk at South by Southwest 2015. “I had multiple email addresses… Google shut me out because I was sending too many emails.”

It was as simple as saying “Hey, they’re using [Yik Yak], it’s kind of weird that you guys aren’t,” Buffington said. “As long as one person forwarded the email to their organization, we would take over a school in a day.”

The emails, addressed to Greek leaders and other on-campus groups, didn’t read like a pitch you’d see at Stanford: “[Dear] Tyler, would you like to do a solid for a rad dude?”

Playing the schools against each other caught on, and the app spread like wildfire. Unfortunately, so did its trolling problem—but Droll and Buffington claim to be taking that part very seriously. 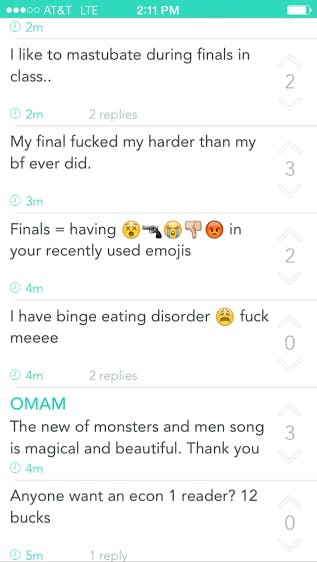 “Having moderators deal with everything is not super scalable,” Droll explained. Yik Yak has both an in-house team for community moderation and an outsourced external team that can keep tabs when the Atlanta-based team isn’t around. Yik Yak famously implemented geofencing to disable the app within a certain radius of any high school. “We took an unprecedented measure and just blocked all high schools in America,” Droll said. “[It was] basically kicking users off our app.”

Yik Yak can’t scale its moderator team to keep up with its user base, so it’s looking into natural language processing tools for a more automated approach, Droll explained. “Every day we’re trying to make it better.”