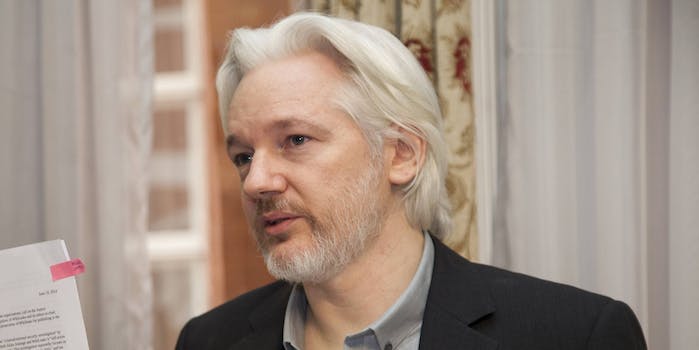 Julian Assange likely has no idea who hacked the DNC

WikiLeaks has a long history of publishing leaks that originated with anonymous hackers.

While Democrats took the stage in Philadelphia on Monday and attempted to reconcile differences between Bernie Sanders and Hillary Clinton supporters, the internet remained largely focused on the content of more than 20,000 Democratic National Committee emails published last week by WikiLeaks.

Police officers lined portable fences near the perimeter of the secured area outside the Well Fargo Center, observing as, one after another, more than 50 Sanders supporters climbed the barricades and peacefully surrendered themselves for arrest. Some held signs declaring “Never Hillary,” while others chanted in unison, “Election Fraud! Election Fraud!”

A video captured by Vice News, tweeted Tuesday, showed a second, smaller group of Sanders supporters chanting, “Off with her head!”

Political pundits on television provided regular updates on the WikiLeaks release, the resulting resignation of DNC chairwoman Debbie Wasserman-Schultz, and—often clumsily—cybersecurity matters related to the breach. More often than not, the narrative drifted into conversations about President Vladimir Putin and Russian-sponsored hackers, which a handful of cybersecurity firms say are likely responsible. The ability of these firms to accurately attribute the breach is highly disputed by some security analysts.

During a rare interview Monday on NBC Nightly News, WikiLeaks founder Julian Assange dismissed attempts to attribute the hack to Russia as unreliable at best. “There is no proof whatsoever,” said Assange of Russia’s rumored involvement, noting (as WikiLeaks has repeatedly done on Twitter) that his organization has not disclosed any details concerning the identity of the leaker.

Assange’s regard for the protection of his source is commendable, at least from the perspective of those who believe journalists are entitled to shield their sources—which is to say, not everybody does. But in addition to being principled, it is equally likely that Assange, who’s been trapped in Ecuador’s London embassy since August 2012, is skirting around the key question: Does he really know the identity of his source?

If history serves as a guide, it’s likely WikiLeaks has no clue as to who is responsible for breaching the DNC’s network.

The Daily Dot reached out to an attorney for WikiLeaks, and we’ll update if we receive a response.

By all accounts, no one at WikiLeaks had ever heard of Bradley Manning (now Chelsea) before it published the leaked “Collateral Murder” video and classified “Reykjavik 13” cable she provided, the former of which elevated Assange to a household name. In June 2010, less than two months before the release of more than 75,000 secret U.S. military reports—collectively known as the Afghan War Diary—Assange told the BBC that his organization endeavored to protect its sources: “We do not know if Mr. Manning is a source,” he said, “but we understand there are allegations that are being taken seriously so we are naturally inclined to try to defend [him.]”

When Assange says, “We keep secret the identity of our sources,” he often means precisely that: No one, not even him, knows who they are. And while Manning frequently interacted with WikiLeaks and its supporters in chatrooms, she chose the organization’s online disclosure portal, through use of the Tor anonymity network, to transfer the more than 734,000 U.S. diplomatic cables and U.S. Army reports that now comprise the Afghan War Diary and Iraq War Logs.

It wasn’t until December 2013, several months after Manning was handed a 35-year prison sentence that chat logs revealed actual conversations between Assange and Manning. Both used aliases during every interaction.

Note on sourcing #DNCLeaks. We have, as usual, not revealed our sources. Anyone who claims to know who our source is has no credibility.

In late December 2011, Assange initiated contact with a group of Anonymous hackers trying to acquire more than five million emails from Texas-based publisher Stratfor, which now reside on the WikiLeaks website under the title “Global Intelligence Files.” According to a chat log from the period, someone claiming to be Assange’s secretary spoke to Hector Monsegur, a former LulzSec hacker who had been arrested six months before, requesting access to Stratfor’s stolen emails.

Monsegur, also known as “Sabu,” is one of at least a half dozen Anonymous and LulzSec members to be arrested between 2011 and 2012. He began cooperating with the Federal Bureau of Investigation in early June 2011, after his identity was revealed by a fellow hacker. According to court records, federal investigators at the time threatened to hand his two nieces, who were both under the age of 10, over to child services.

Portrayed in books and film as the “snitch” inside Anonymous, Monsegur is one of several Anonymous-affiliated hackers who cooperated with law enforcement. A 10-hour police interview obtained by the Daily Dot reveals that after another prominent member of LulzSec was apprehended overseas, he attempted to exchange information about Monsegur’s identity—among various other details about Anonymous activists and operations—in exchange for leniency.

WikiLeaks had its own brush with an FBI informant in 2011. Sigurdur Thordarson, a 22-year-old also known as “Siggi,” was reportedly paid $5000 by the FBI to spy on Assange. He was later accused by WikiLeaks of stealing around $54,000 of the organization’s funds and has since faced multiple prison sentences in Iceland for sexually abusing underage boys.

Sealed court records leaked to the Dot show “AntiSec” hackers in December 2011 using thousands of stolen credit cards to, according to the FBI, charge up to $700,000 in fraudulent donations to groups such as the Chelsea Manning Support Network, the Electronic Frontier Foundation, and perhaps WikiLeaks itself. Logs show the hackers discussing various interactions with a person they presumed to be Assange after delivering the Stratfor files.

One of the hackers is Jeremy Hammond, also known as “sup_g,” who is currently serving the remainder of the 10-year prison sentence in a maximum security prison in Kentucky. Confidential records published by the Daily Dot last year revealed the government at some point placed Hammond on a terrorist watchlist.

It took WikiLeaks nearly two months to vet the AntiSec material and create a search engine for public use, which is identical to the engine that allows people to comb through the DNC’s emails. As with Manning, WikiLeaks apparently had no knowledge of the sources’ true identities at the time of the release.

An embargo agreement crafted by WikiLeaks for news outlets covering the Stratfor leak contained strict guidelines for publishing stories, including a timeline for what kinds of emails could be revealed to the public when, due in part to “elections around the world and legal matters WikiLeaks and Julian are involved in.”

Below is a never-before-seen 156-page chat log, titled #LulzXMas, which offers a behind-the-scenes look at the Stratfor hack as it happened and the descriptions the hackers gave of their interactions with Assange.

Editor’s note: Personal and financial information of victims, various security flaws, links, and names of certain uninvolved parties have been redacted for the sake of privacy.