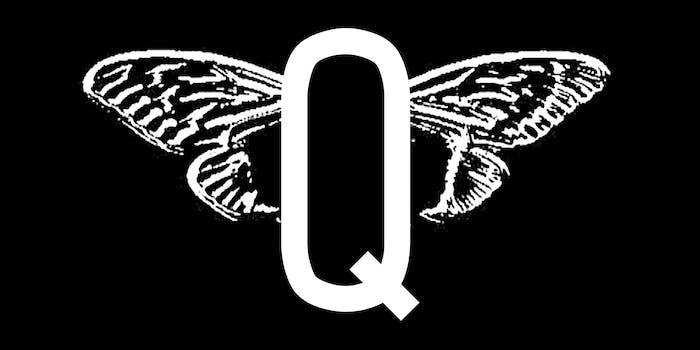 The mystery of QAnon thickens.

In March 2018, a cryptic post went up on the nether reaches of the web, making an inscrutable claim about something that would supposedly happen soon.

“Eagles rain fire on the Canaanite, as the merchant of wine challenges Cyrus. The sword of Lilly joins forces with Jacob’s adopted children.”

Over the phone several months later, the person who claims to have posted the message called it “deadly accurate,” as he walked through what he said his words foretold.

Eagles are F-16s, and the Canaanite is Syria. The raining fire was a strike made against Syria in response to a chemical weapons attack in April, less than a month after the prediction was posted.

“The first part of the prophecy came true on April 8, when … jets bombed Lebanon and Syria,” he said. “The second part will come true this summer when the Saudis bomb Iran. The third part comes true by fall when Turkey and Israel do covert ops against Shia in Iraq.”

You might be forgiven for thinking these are the words and postings of QAnon, the mysterious, shady, supposed insider who claims to have insight into the inner machinations of the Trump administration and the deep state.

Since November 2017, when a mysterious poster began making wild claims on 4chan, the internet has speculated about QAnon. The poster, who claimed to have a secret government clearance, was rumored to be—at different points—a Trump administration insider, a deep state operative, or a concerned citizen.

QAnon’s identity is only somewhat less important than what it promised to reveal: A massive underground pedophile ring within the Democratic party. Tens of thousands of imminent arrests. A great awakening that President Donald Trump was about to bring about.

For close to a year now, people have been conflicted about what QAnon is and who is behind it: Was it really a government insider, or a prank on Trump supporters? Is it even real?

In June, the Daily Dot spoke with a person claiming to have invented the idea for QAnon. Asking only to be identified by Thomas, he claimed it began as a live-action roleplaying game—a movement he said was stolen and is being perverted by whoever is now posting as QAnon.

Well before there was Q, there was Cicada 3301, which Thomas made music for.

Originally posted on 4chan (where the QAnon conspiracy also first flourished) in January 2012, the Cicada 3301 puzzle baffled the web. It announced its presence with a cryptic post and claimed there was a hidden message within that only true polymaths could decipher.

It was dubbed one of the hardest online puzzles ever, and the subsequent black-and-white pictures of a cicada—a bug that only comes around every 17 years (a prime number, it’s worth noting)—contained secret messages that could only be cracked by someone with serious code-breaking skills, as well as an understanding of “obscure medieval literature and Mayan numerology.”

Speculation quickly grew that it was the work of the NSA and CIA, a recruiting attempt to find bright minds lurking on the internet. Or it was the Freemasons. Or a well-funded international NGO. Everyone had an idea. But while Cicada puzzles continued to iterate, in the past year, Thomas claimed to have invented a new game—a live action roleplaying game (LARP) he said was based on making cryptic predictions, using prime numbers, and people identifying themselves using letters from the alphabet.

If that sounds like QAnon, that’s because, Thomas says, the people now behind QAnon took the concept from them.

On Sept. 25, 2017, the Cicada group published a video and post on Bitchute that said to “Follow the White Rabbit”:

It was referenced online, too.

The Bitchute post flagged by Thomas on Sept. 25 makes no reference to the letter Q, despite Thomas saying it’s where Q originated. Over email, he called the “Follow the White Rabbit” post the beginning of a new LARP, made as a “nod to his friend.” He then went on to say that the LARP was discussed over a series of Twitter group DMs, insinuating that idea for whoever is doing QAnon on 4chan took it from there.

Unrelated, two weeks later, on Oct. 6, Trump spoke before a group of military officials and their spouses. During it, he quizzically asked them if they knew what “this” was, referring to the gathering.

“This” he said, was the “calm before the storm.”

The comments came in the midst of Trump ramping up threats against North Korea. Months earlier Trump had promised to rain “fire and fury” down on the nation. His words about the coming “storm” prompted concern and speculation, as well as a conspiracy poster on 4chan.

On Oct. 27, the person who would become known as QAnon predicted Hillary Clinton would soon be arrested.

A week later, posting on 4chan, they referenced Trump’s comments:

Four carriers & escorts in the pacific?

Why is that relevant?

Prepare messages of reassurance based on what was dropped here to spread on different platforms.

The calm before the storm.

On both Reddit and 4chan, forums using the Calm Before the Storm (CBTS) phrase developed, and a deep state conspiracy soon grew. While Q, on 4chan, never referenced Cicada’s “Follow the White Rabbit” phrase, the two conspiracies became inextricably linked through a Twitter account, which was promoted on 4chan’s Calm Before the Storm.

@THEWH17ERABB17‘s handle included what could be considered a reference to Cicada’s and their LARP,  and it also included double 17s in the name in lieu of the letters “IT” for White and Rabbit. Those could be construed as a possible reference to Q, the 17th letter of the alphabet, but it’s also possible that it’s a reference to the prime number and the number of years cicadas stay dormant.

@THEWH17ERABB17 posted meme-style snapshots of Q posts from the 4chan thread, but it was eventually suspended from Twitter.

The crossover exploded on Twitter, and some original coverage of the QAnon phenomenon often referenced  “Follow the White Rabbit.”

Whether Cicada was involved in the White Rabbit account is unclear, and Thomas and others did not respond to questions about that account.

Outside of Thomas pointing to the Sept. 25 post and claiming it was Q, there’s no real proof. And as the posts went on, the conspiracy theory movement simply become known as QAnon, and any White Rabbit association dissipated.

And although he claims to have created the idea behind it, Thomas now says they have had no involvement in the 4chan—and subsequent 8chan—iteration of QAnon. Said one person involved in Cicada, “when Q Anon started posting, I was pissed.”

Those behind Cicada have taken particular umbrage at the mainstreaming of QAnon, as well as QAnon’s predictions, because Cicada/White Rabbit had a “history of accurate ones,” unlike Q.

While Cicada/White Rabbit’s own predictions have been given some credit online for their accuracy (some say they predicted the CIA’s Vault 7 WikiLeaks drop last year), anyone can make cryptic posts online and twist them to prove themselves right.

But over the phone, Thomas did have one concrete prediction: That QAnon would one day reach 30-40 million people. What seemed absurd at the time actually happened last week, when Trump’s rally in Ohio showed people really believe in the movement and were ready to go public with their beliefs. It received widespread media coverage, thrusting it into the center of the national conservation.

But it forces the question. To what end?

Thomas, of course, has a theory: “When I look at QAnon now, I think CIA,” he said. “I believe it’s now a psyop … and [a plan] to weaponize 30-40 million evangelicals to support Trump and sell them on war with Iran.”