Photo via Bryan Alexander/Flickr (CC BY 2.0)

Uber wins and its drivers lose during D.C. Metro shutdown

Everyone had to adapt during the unprecedented shutdown.

Shutting down the nation’s second-largest public-transportation system is no small feat. The Washington Metropolitan Area Transit Authority surprised many on Tuesday when it announced a last minute 29-hour shutdown of the D.C. Metro to allow it to conduct safety checks.

Given that many in the nation’s capitol and the surrounding suburbs rely on its rail system to get to work or school, it made sense that demand for ride-sharing services Uber and Lyft would skyrocket during the Wednesday morning rush hour.

I'm thinking of leaving now….. to get to work in the morning. #WMATAshutdown pic.twitter.com/SydlfbyhbU

@uber and @lyft fitting to be LIT tomorrow. What a time to be alive for all the drivers out there. #wmatashutdown pic.twitter.com/rgxx2gyvdG

That may have been the case for Uber, but not for its drivers. The company announced that signups jumped by 70 percent during rush hour and that nearly three times as many people took their first trip compared to the same period last week.

While surge-pricing for Uber X began around 8am, surged fares remained just under twice the normal rate. That may have been due to an increase in drivers working in order to handle the anticipated demand.

The fare jump was nowhere close to the 3.9x surge cap that Uber announced on Tuesday night, as it prepared for a possible influx of Washingtonians scrambling for an alternative means of getting to work or school.

At 8:25am, an Uber X from Logan Circle, a popular residential neighborhood, had an estimated arrival time of 4 minutes. 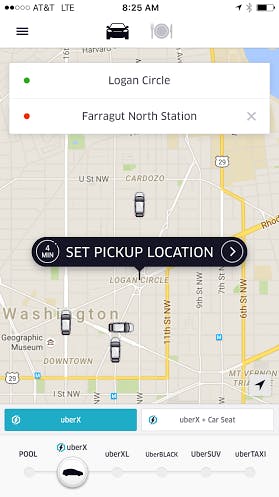 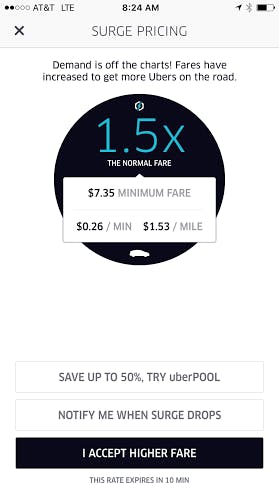 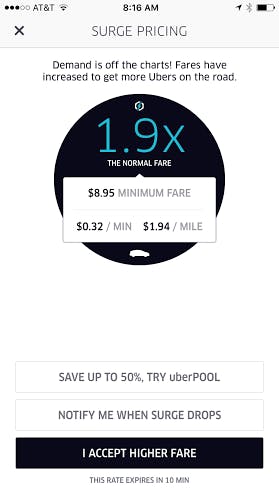 Uber issued a statement on Tuesday that made it clear the company expected requests to be off-the-charts, and it said it would be working “around the clock to keep DC moving” during the shutdown.

The company asked passengers to be patient, warned them to expect longer wait-times, and suggested that they use Uber Pool, which the company expanded on Wednesday to include the entire metropolitan area.

The Daily Dot spoke to Wilbert, an Uber Pool driver, who said demand was far lower than he expected. To make things worse, rush-hour traffic limited the number of trips he could make.

Wilbert began driving at 6:30am and by 9am was only on his third Uber Pool trip, driving from the NoMa neighborhood to Union Station. His previous trip, from North Bethesda to Union Station, took him an hour and 20 minutes.

Wilbert received no other passenger requests during his third ride. The total fare was $4. He said that he planned to clock out by 9:30am.

“I don’t know why they decided to do this today,” he said. “They can do Sunday.”

In a blog post on Wednesday afternoon, Uber said that “a record number of [drivers] were on the road—an increase of 50% over last Wednesday’s rush.”

“Despite overwhelming demand,” the company said, “the average surge multiple stayed below 1.7x during the morning rush.”

A surge rate of 1.7x is comparable to a typical weekend night and nowhere near the 7x or higher surged prices that Uber experiences on holidays like New Year’s Eve and Halloween.

Why the lack of demand for Uber and Lyft? It seems the rideshare companies can blame the Office of Personnel Management, the federal government’s human-resources office. OPM encouraged the thousands of federal employees who work in D.C. to telework or take unscheduled leave on Wednesday.

The Daily Dot spoke to a few Washingtonians to see if the Metro shutdown was as apocalyptic as some expected.

Howard Jones, who drives every morning from Northwest D.C. to work in D.C.’s NoMA neighborhood, was pleasantly surprised by his Wednesday commute, saying it was lighter than usual.

“So, it is interesting,” he said. “You may expect more people to be driving on the road. But I guess everyone took advantage of the telework or the liberal leave policy that the government had. I hear there are some places that are crowded out on the Beltway. I guess there are a couple of choke points around town.”

Capitol Bikeshare even announced that it would offer free bikes during the D.C. Metro shutdown, but Washingtonians seemed to be just fine.

A Capitol Bike Share nobody gets to use? Or just the White House? #capbikeshare pic.twitter.com/h8tymqnGo3

Doug Abbott, who normally rides a Capitol Bikeshare bike to work every day, said he had no trouble beating off the masses to get to work that morning.

“I didn’t really see anything out of the ordinary,” he said. “I was kind of surprised. I got a bike in the same station as always and got here just fine.”

Margaret Fogerty and Jennifer Armbruster were both visiting the nation’s capitol from Denver. The two women told the Daily Dot that the temporary shutdown of D.C.’s subway system hadn’t put a damper on their plans. Instead of taking the Metro, the two women were planning to take a taxi to the Smithsonian museums.

“I’m okay with it, because I don’t rely on the Metro to get around every day,” Fogerty said. “But I can absolutely understand how disruptive it is to the community and the folks that live here.”

The D.C. Metro shutdown did throw a wrench into Bryan King’s commute. King, who usually drives to the Silver Spring Metro station and takes the subway to work in Northeast D.C., had to rely on the MARC, Maryland’s separate transit rail system.

“It was relatively painless,” said King. “A lot better than I thought it was going to be. But there were delays.” He said he blamed those delays on long lines for tickets and less frequent MARC trains.

Even though she was lugging a roller suitcase up First Street Northeast, Karen Goldson seemed to be in a good mood when The Daily Dot caught up with her. Goldson said she would normally have taken the Metro to Union Station, where she was scheduled to take an Amtrak train home, but that she decided to walk to the station instead.

“It’s a nice, beautiful day,” she said. “I thought there would be more traffic. But it seems to be that people have found a different way or are working remotely.”

The same seemed to be true for Lyft.

@WTOP I drive for Lyft. Waited for over an hour and didn't get one call for service from Capitol Hill area. Is Metro really shut down?

Photo via Bryan Alexander/Flickr (CC BY 2.0)