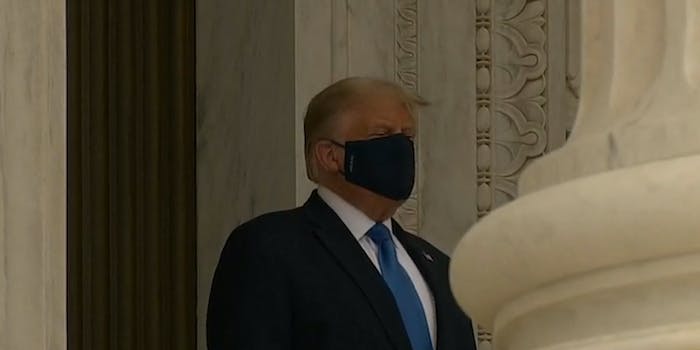 A crowd of onlookers shouted at President Donald Trump as he visited the casket of former Supreme Court Justice Ruth Bader Ginsburg lying in repose at the nation’s highest court on Thursday.

The president and first lady arrived at the Supreme Court just before 8am CT, according to pool reports. Video shows the onlookers booing shouting “vote him out!” and “honor her wish!” at the president while he stands silently—wearing a mask—on the steps of the Supreme Court. First Lady Melania Trump was also standing near the president.

Ginsburg, a champion of women’s rights, died on Friday. She was 87. The “honor her wish” chants referred to Ginsburg’s reported dying wish that a new president would nominate her replacement on the court.

NPR reported that Ginsburg dictated her wish to her granddaughter in the days leading up to her death, specifically saying that her “most fervent wish is that I will not be replaced until a new president is installed.”

Earlier this week, Trump baselessly questioned whether or not Ginsburg’s wish was true during an appearance on Fox & Friends. While being interviewed, he floated the idea that Democratic lawmakers like House Speaker Nancy Pelosi, Senate Minority Leader Chuck Schumer, and Rep. Adam Schiff (D-Calif.) wrote Ginsburg’s wish.

Trump and Senate Republicans have said they will push ahead with a nominee to replace Ginsburg. The president said he will make an announcement on his nominee on Saturday.