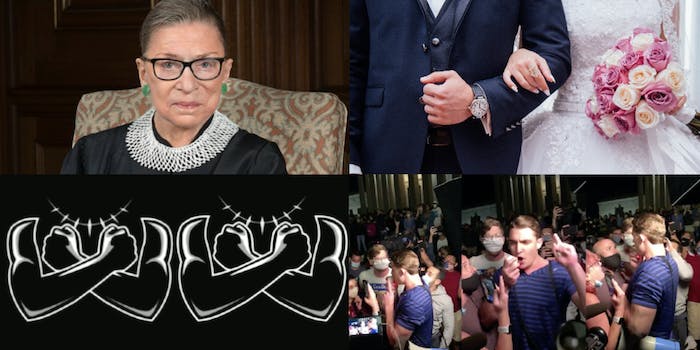 A Karen called a Black shopper the N-word in Walmart. When urged to “say it again,” however, the woman faltered. Here’s what else caught our attention this weekend:

Experts have cautioned that weddings—even small ones—can easily become coronavirus superspreading events. One Maine wedding alone is reportedly linked to the deaths of seven people who didn’t even attend it. And when Ginsburg officiated the wedding, the state of her health was already a subject of concern.

Ginsburg officiated the outdoor wedding of family friends Barb Solish and Danny Kazin on Aug. 30. Solish tweeted out a photo of Ginsburg standing behind the couple during their nuptials. “2020 has been rough, but yesterday was Supreme,” the bride tweeted.

At the time, Twitter users warned her: “People will come for you if anything happens to her.”

And so they did.

While it hasn’t been confirmed if Ginsburg’s death has anything to do with the coronavirus, Solish and Kazin are now getting blamed for “murdering RBG.” The backlash was apparently so immense that it led to Kazin and Solish both locking their Twitter accounts.

They weren’t the only ones to lock their accounts this weekend. A mom also locked hers after claiming her 10-year-old daughter said “Ruthkanda forever” when learning of RBG’s death. While the tweet was bad, the memes it inspired did lighten the timeline a bit.

At this point the science is settled: Everyone should be wearing a face mask to help reduce the spread of COVID-19. The best option to protect yourself and your family are FDA-registered surgical masks—but where should you buy them? There are a ton of “”medical masks”” being sold in pharmacies, gas stations, and on Amazon, but are they legit? If you get a fake pair of Converse, it’s a bummer. But if you get a surgical mask that doesn’t provide the protection you think it does during a global pandemic? You’ve got a problem. A big one.

Armbrust USA is an American manufacturer of FDA-registered, ASTM Level 2-rated, disposable surgical masks made in Austin, Texas. The millions of masks produced each week in the company’s sterile manufacturing plant are used by hospitals, state governments, and, now that they’re available online directly, hopefully you.”

IT’S ALL IN THE HANDS

During a conversation with reporters in North Carolina on Saturday, President Donald Trump said he will “most likely” nominate a woman to replace the late Ruth Bader Ginsburg on the Supreme Court. As Trump made this statement, however, he seemingly outlined the shape of hourglass curves with his hands. People are calling it “creepy” and “misogynistic.”

Will telemedicine be the new normal after the COVID-19 pandemic is over?

Healthcare professionals, adjusting to the coronavirus pandemic, have turned to telemedicine to get the job done. Orthopedic surgeons, unable to check in with patients in person, use telemedicine to assess how patients are healing. Meanwhile, pediatricians split their days in half between “well child” video checkups and in-person immunizations. Prior to the pandemic, the adoption rate of telehealth by consumers and healthcare professionals was “pretty low,” according to Ann Mond Johnson, the CEO of the nonprofit American Telemedicine Association. Now, rates have “skyrocketed,” as the future of telemedicine is here now.

VILLAIN OF THE WEEKEND

Far-right troll Jacob Wohl is the villain of the weekend for dancing on Ruth Bader Ginsburg’s grave. Wohl was caught on video crashing a vigil at the Supreme Court—where mourners were leaving flowers, lighting candles, and singing together—in honor of the revered women’s rights champion. “Roe v. Wade is dead,” he gloated through his megaphone. “Ruth Bader Ginsburg was a horrible justice.”

Inspired by the Digg’s “Who Was This Week’s ‘One Main Character’ On Twitter?“