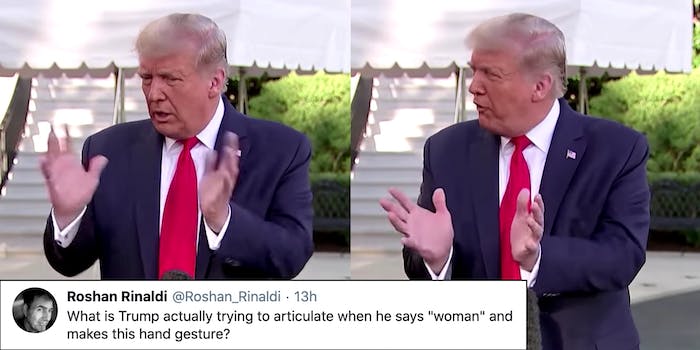 Some are calling the gesture, which he’s used before, 'creepy' and 'misogynistic.'

President Donald Trump said he will “most likely” nominate a woman to replace the late Ruth Bader Ginsburg on the Supreme Court, but he did so in a way that people are calling “creepy” and “misogynistic.”

During a conversation with reporters in North Carolina on Saturday, Trump confirmed he would be putting forth a nominee for the court this coming week.

As Trump made this statement, however, he seemingly outlined the shape of hourglass curves with his hands.

Detractors immediately latched onto the gesture, taking it as yet another sign that the president has very little respect for women.

Others are saying it’s not a coincidence considering it isn’t the first time Trump has used this gesture while talking about women.

Back in April, the president made a joke about dating models during a press conference in which the topic was models for potential COVID-19 death rates in the United States, and he made the same gesture.

Just last week, body language expert Dr. Jack Brown shared screenshots of Trump making a similar gesture on yet another occasion, pointing out that Trump “often displays a particular gesture with his right hand that’s completely incongruous with his verbal statements” and that it happens “more often when he’s answering female journalists.”

“This #Nonverbal behavior is a glimpse into Trump’s misogynistic and sexually preoccupied psyche,” Brown concluded.

While a simple hand gesture pales in comparison to many of the atrocities and the chaos present in the country at the moment, it’s still yet another small sign of what’s at stake in the United States as we look toward the November election—the presidential race, the possibility of switching up the majorities in Congress, and, perhaps most importantly, whatever is to become of the Supreme Court.