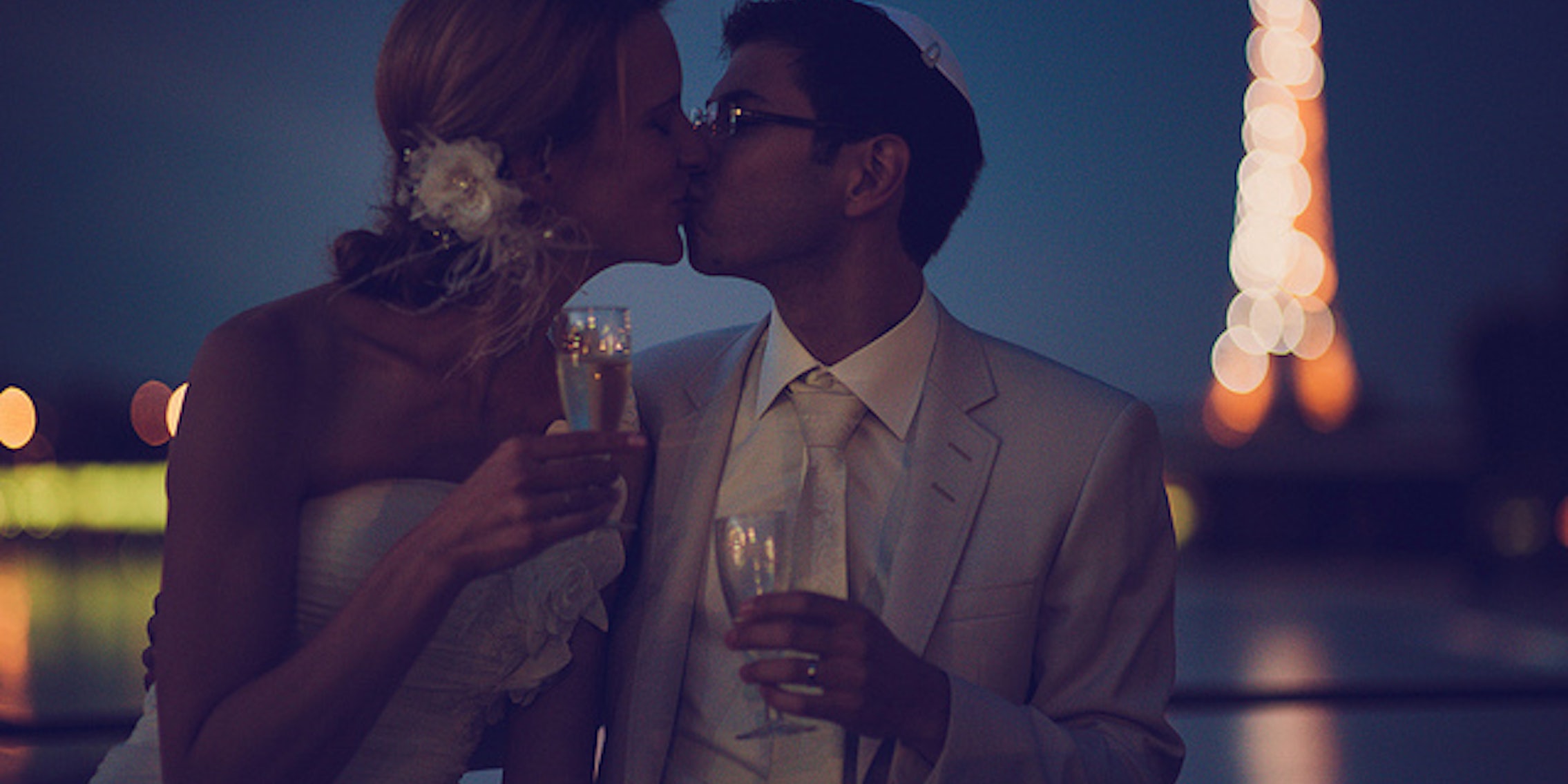 It’s 10:00pm on a Wednesday night and I am in bed in my pajamas, logging onto a virtual Jewish singles event and watching standup comedian Jonathan Morvay attempt to warm up the crowd. He’s slightly built and swarthy, and if you went to summer camp when you were 10 he looks kind of like one of the Color War deputies you’d have had a crush on. He looks like he’s in his living room, and he’s addressing a dozen or so Jewish singles, whose avatars are arranged in a neat little row, or “mingle bar,” at the bottom of the screen.

Morvay is serving as emcee for the virtual Matzoh Ball, an annual event widely known as “the mother of all Jewish singles parties.” Every year on Christmas Eve, nearly 4,000 Jewish millennials from across the country eschew the traditional Chinese-dinner-and-movie to drink and dance in New York City, Miami, or Los Angeles, in the hopes of meeting and/or falling in love and/or sleeping with a fellow member of the tribe. It’s an IRL equivalent to dating apps like Tinder and, of course, J-Swipe.

“There are people who are trying to meet their future husbands, and then there are people who are trying to hook up and get as many numbers as they can,” Morvay, who has attended a handful of previous Matzoh Balls, told me. “It’s like insane speed-dating for Jews.” But it’s not just Jews who are welcome at the Matzoh Ball: Goyim are also invited to attend. (In fact, Morvay says, there’s a sizeable contingent of Asian women who show up at the event, for whatever reason.)

This year, the Matzoh Ball is being preceded by a string of biweekly virtual meetups on Shindig, a group video chat startup. I found out about the event when Morvay, a 29-year-old standup comedian, posted about it on his Facebook wall. (Full disclosure: He very briefly dated my best friend in the early aughts.)

“There will be bodiless Jews from all over the U.S. participating so don’t miss out on your chance to connect with those lonely lovers looking for someone to step on a glass with,” the post said.

As a non-bodiless Jew in a long-term relationship with a non-bodiless (half) Jew, I wasn’t interested in actually meeting someone at the Virtual Matzoh Ball. But I was curious as to what a virtual Jewish singles event might actually look like, especially because it was a) free, and b) I wouldn’t have to actually put on pants to attend. Plus, as a singles event targeted at middle-class Jewish millennials looking to settle down with other Jews, it was unlikely that the Virtual Matzoh Ball would attract creepsters and exhibitionists the way most dating apps and websites do, so I wouldn’t have to worry about someone waving their circumcised dong at me via videochat.

So while my boyfriend and his friend were watching the Knicks game (“brb gonna make a Jewish boyfriend,” I Gchatted to him), I had a glass of wine, crawled into bed, and got ready to virtually mingle with some Semitic singles.

10:00 pm. Over the dulcet tones of Color me Badd’s “I Wanna Sex You Up” (Morvay has explained he’ll do standup and play music videos every 10 minutes or so, as a sort of “commercial break”), the 12 or so members of the meetup start to pair off and engage in conversation. Even though the Virtual Matzoh Ball is taking place online, the same magnetic force that kept the genders separated during your adolescent social functions seems to also be in play here; the mood is very much like that of a virtual sixth grade square dance.

10:10 pm. I initiate a private conversation with a gentleman named “Max.” However once I enter our private chat, I immediately see that Max is already talking to “Michelle,” who is drinking champagne with a friend. Just like a singles mixer IRL, it seems that people have already started pairing off.

Nonetheless, Max is polite about the intrusion. “Hey, Liz,” he says. (I have decided to go incognito as “Liz,” in the event that I run into a relative and am forced to explain myself. If you knew my relatives, you would know this fear is not unfounded.) “Can you turn your camera on?”

“Go to settings,” he suggests, perhaps a bit more forcefully. “Turn it on in settings.”

“Just turn it on in settings,” he demands.

The images of Max and Michelle go dark. Either my connection has gone bad, or I have been booted from the conversation. As in the dating world IRL, at the Virtual Matzoh Ball two is company, but three is a crowd.

10:15. It’s the first break in the mingle, so it’s time for Morvay to do a little standup. “My girlfriend’s really nervous about getting pregnant,” he says. “She’s on the pill and she won’t have sex with me.” Radio silence. “I can’t hear you guys, so I can’t tell if the jokes are working,” he says. “Can you give me a thumbs-up if they’re working?” The few people with their cameras turned on give a thumbs-up. I begin to develop a new-found appreciation for standups, particularly when they, like Morvay, can neither hear nor see their audience. 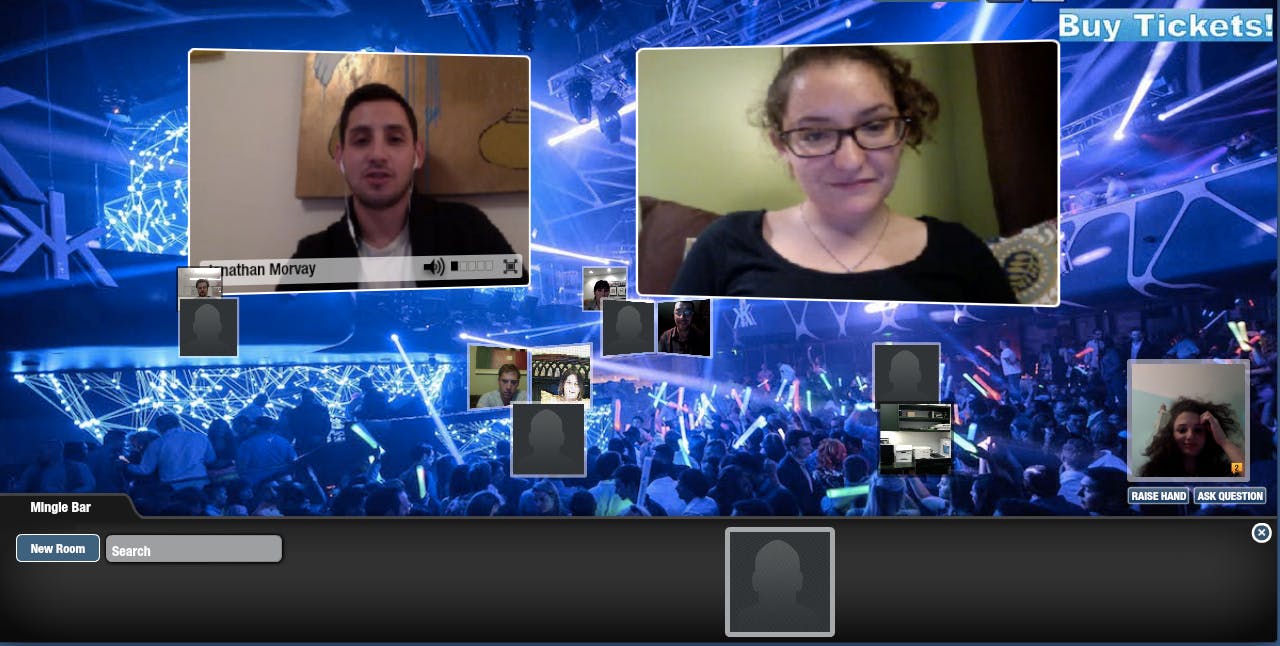 10:20. It’s been 20 minutes, and I still can’t figure out how to turn on my camera; plus, the few guys in the room keep turning down my chat requests in favor of talking to the women who do have their cameras on. This makes me furious, as my hair happens to look exceptionally shiny tonight.

I storm out into the living room, where my boyfriend and his friend are watching the Knicks game. “Can you guys help me turn my camera on?” I ask. They both simultaneously look at me glassy-eyed and make a “pfft” sound with their mouths that I intepret as “nah.”

Dejected, I go back into my room and return to the Virtual Matzoh Ball, just in time to watch Morvay conduct an impromptu “interview” with a slim, dark-haired female attendee. Her name is Ava, and they’re talking about Halloween, which is a day or two away.

“What’s your favorite Halloween candy?” Morvay asks. “Are you into the candy corn?”

“Nope, more like a Kit-Kat type of gal,” Ava says. The interview pretty much ends there.

10:30. Although my mic is still not working, I talk to Ava in private chat. She tells me she’s based in Ann Arbor, where she’s getting her MBA at the University of Michigan. Like me, she found out about the event via Jon Morvay’s Facebook page, and is a friend of his. (Morvay later tells me they’re actually dating.)

I ask Ava if she’d ever actually consider meeting someone at a virtual Jewish singles mixer. She seems open to the idea, though because she’s in Ann Arbor she doesn’t really see the point of engaging in conversation with the other users, most of whom appear to be based in bigger cities.

“It’s a pretty low barrier to approaching a conversation,” she says. “There are girls talking with girls, other guys. It’s an easy way to interact with other people, compared to a bar where you might be nervous to start a conversation with someone.” Which, I suppose, is true: Unlike a bar, where you have to muster up the courage to approach someone for a conversation, initiating a conversation at the virtual Matzoh Ball is as easy as clicking on someone’s avatar.

Our conversation is cut off by Morvay, who’s started an interview segment with another user, Kayla from New Hampshire. “I liked Safed,” she’s saying as I turn up my sound. “Jerusalem was gorgeous.”

“There’s nothing not to love about Israel, it’s a beautiful place,” says Morvay. Only at a Jewish virtual mixer would 20-somethings use a volatile geopolitical region as a springboard for flirtatious banter.

10:45. Frustrated that I can’t turn my mic and my camera on at the same time, I start talking to Mike, a programmer who wears glasses and has a minor speech impediment. He tells me he heard about the Virtual Matzoh Ball from his dad, who wants him to meet a nice Jewish girl someday. “I suppose it would make things easier,” he says, “but honestly, I prefer Asian chicks.” Yeah, join the club, dude.

Mike doesn’t seem to be bothered that he can see me but can’t talk to me (see the above discussion re: my exceptionally shiny-looking hair). He’s what a goy would call “garrulous,” or what my Grandma would call a kibbitzer: He clearly likes to talk, and he talks a lot, but he asks a lot of questions and doesn’t seems uninterested in what I have to say. We chat a little bit about school (he just graduated), smartphones—he prefers Android, “though I will say in all likelihood my next laptop is a Macbook Pro”—and the tech blog Gizmodo before Morvay announces that the event is drawing to a close, though we’ll be allowed to stay in the room and mingle afterward. I say goodbye to Mike and log off just as the chatroom DJ starts spinning A-ha’s “Take On Me.”

Technological difficulties and the sketchiness of Mike’s “Asian chicks” comment aside, overall I’m fairly impressed by the Virtual Matzoh Ball: While it seems fairly disorganized at this stage (and while I could do without the standup or the 10-minute music video interruptions), it seems like a fairly easy and convenient way to meet people online, once you get over the initial awkwardness of starting a chat. If anything, it’s a promising alternative to an app like Tinder, where you have to comb through hundreds of lewd messages and dick pics to find someone even halfway sane and literate to talk to.

That said, there’s something about the Virtual Matzoh Ball, and the concept of virtual singles meetups in general, that strikes me as a bit laborious, especially in its current form with its technological hiccups and contrived structure. Now that online dating is essentially stigma-free, and meeting someone on the Internet is as easy as ordering a pizza (or easier), it seems that there’s little need for an online venue to replicate an old-fashioned, IRL matchmaking situation like a singles mixer.

If there’s nothing else I’ve learned from covering sex and online dating, it’s that if people want to meet someone online to fall in love with, or at the very least have sex with, they’ll find a place to do it—and it may not be on a traditional dating platform. In light of stories of people finding their soulmates on non-traditional social platforms and dating apps like Instagram and QuizUp, the Virtual Matzoh Ball seems like something of a retro throwback, a 20th century dating ritual imbued with a 21st century twist.

But should the Virtual Matzoh Ball become a biweekly event, I hope Mike et al. return and find a nice Jewish girl or two on there, because that would be a mitzvah.