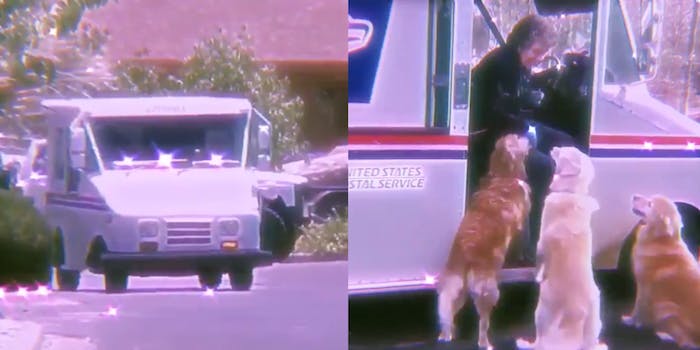 The Lincoln Project accused of stealing USPS fancam from teen

The GOP movement to get Trump out of office simply made the music and caption G-rated.

Why, you make a USPS fancam, of course.

With COVID-19 dramatically unlikely to be under control by November, mail-in voting is more important than ever. But President Donald Trump has gone on record saying he doesn’t want to provide any sort of government bailout or emergency funding for the USPS because it will hinder mail-in voting.

Trump recently appointed one of his loyal supporters, Louis DeJoy, to the office of postmaster general. It is being reported that mail sorting machines are being removed from facilities, mailboxes are disappearing from communities, and many citizens and postal workers alike are claiming that the mail itself is going missing or being delayed by weeks, leading many to accuse the president of trying to dismantle the USPS.

While some folks are resisting by ordering stamps or making sure everyone knows how to submit their mail-in ballots, others have taken an approach that centers more around internet culture to spread the word.

USPS fancams have begun popping up across Twitter, showing footage of postal workers diligently doing their jobs set to music.

By far the most popular one at the moment, @ScribblnTaylor’s fancam set to “WAP” by Cardi B and Megan Thee Stallion has gotten over 57,000 retweets and nearly 170,000 likes since being shared on Friday—on her own account that is.

The Lincoln Project, the GOP movement to get Trump out of office, reuploaded the fancam to its own account on Saturday with a nearly identical caption, only changing out the music for something more G-rated, seemingly trying to pass it off as its own.

The Lincoln Project also set the video to The Marvelettes’ “Please Mr. Postman.”

The move didn’t go over well with people on either side of the political aisle.

The original creator slammed the Lincoln Project for failing to credit her and pointed out that it hasn’t supported the post office as it’s intended to be—an affordable government service for all Americans.

“Can you file a DMCA takedown,,, for a fancam??? LMAOOOOO,” she questioned before adding: “Not surprised these guys were too coward to use WAP lol.”