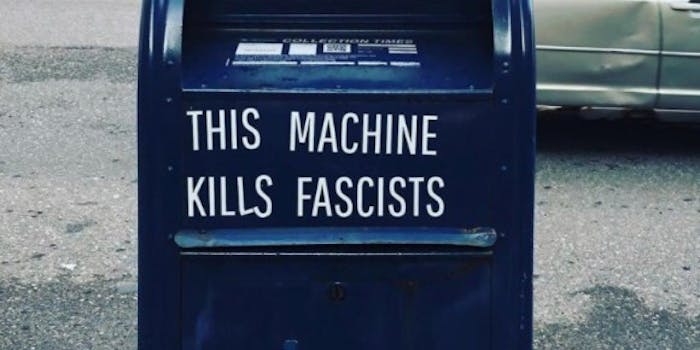 Post Office memes flex on Trump’s attempt to defund it

'Surprised we're the last guardrail against fascism? So are we!'

In what is widely regarded as an attempt to improve his chances of reelection, President Donald Trump is attacking the U.S. Postal Service on multiple fronts.

Trump is vowing to withhold desperately-needed emergency funds as his new Postmaster General Louis DeJoy is implementing a hiring freeze, inexplicably reorganizing the agency, and axing longtime executives at the highest level.

Reports are circulating of mail-sorting machines being deactivated and removed without explanation and mailboxes being taken from city streets.

Now Americans are rallying behind the centuries-old service that predates the nation itself.

Many memes highlighted the Post Office’s role in the election, and how it was being unwittingly abused to aid in fascism.

That did not, however, appear to originate from the union, despite numerous popular accounts sharing it.

Other memes continued to flood people’s timelines in praise of one of America’s most popular institutions.

Unprecedented numbers of Americans are expected to vote by mail in November due to the coronavirus.

Historically, neither party has an advantage in mail-in voting. In part due to Trump’s repeated, unfounded claims that absentee voting (which he’s done and plans to do this year) leads to voter fraud, far fewer Republicans than Democrats have said they intend to use mail-in voting in the upcoming election.

And the resounding call to action has had some effect. Even a Republican senator has. demanded answers on the Post Office.