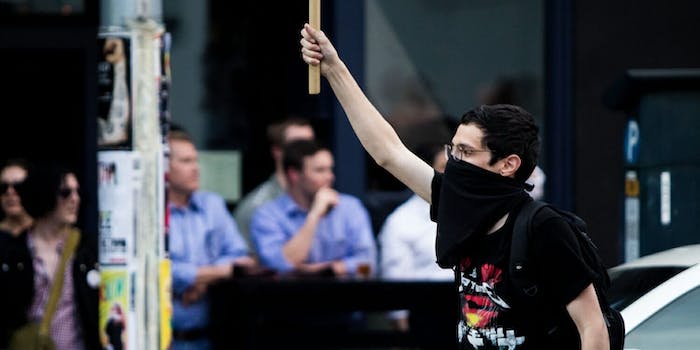 Conservatives and those on the fringe right are cheering a new bill introduced by House Republicans that would make anyone who “injures, oppresses, threatens, or intimidates any person” while wearing a mask or disguise subject to up to 15 years in prison.

It’s being called the Unmasking Antifa Act and was introduced in June by Rep. Dan Donovan (R-N.Y.). Given the legislation’s title, the right was quickly celebrating it as a partisan victory over leftist and anti-Trump protestors.

“The law puts Antifa into the same category as their Democrat cousins in the KKK,” the Gateway Pundit reports, connecting the autonomous antifa movement to the Democrat Party and the Democrats to the KKK—a disproven conspiratorial meme that claims the Klan marched at the 1924 Democratic National Convention.

On Twitter, two influential right-wing media personalities, Mike Cernovich and Jack Posobiec, pushed conservatives across the country to petition their lawmaker into supporting the bill.

As news of the proposed law spread on Tuesday, left-wing activists voiced their concern online that the bill targets them as a political group. Breitbart News didn’t miss the opportunity to gloat about the antifa “freak out,” Vice reported.

Academics began to question the constitutionality of the bill, based on anti-masking laws already in place in several state jurisdictions, introduced in the 1950s to tackle the Ku Klux Klan but controversially used recently against counter-protestors at far right rallies.

“That would be a way to argue that it was unconstitutional,” City University of New York law professor Ruthann Robson told the Daily Beast. “Is it general, or just targeting this group? Because a law targeting some group’s expression would be more problematic. You could call it viewpoint discrimination. There could even be some equality arguments.”

The Daily Dot reached out to Rep. Donovan’s office.

“The title derives from the reality that many recent instances of masked violence have involved antifa, and antifa members have publicly said they use masks to shield themselves from legal consequences,” a spokesperson explained, citing a CNN article which quotes a self-described antifa member.

“But the bill itself doesn’t apply to only one organization,” the spokesperson continued. “It impacts any group or person that deprives somebody of Constitutionally-protected rights while wearing a mask. Additionally, the bill name wouldn’t appear anywhere in statute. So for example if this becomes law and a prosecutor is reviewing potential criminal charges, only the bill language would be in the statute books. Legislators use the names of the people or organizations that inspired bills all the time.”

Donovan’s spokesperson forwarded the Daily Dot information which, although maintained that the bill was not targeting leftist groups only, makes no mention of equally common instances of far-right masked violence but lists and links six incidents of apparent left-wing violence as evidence for the need for the bill.

So while the proposed bill is being cleverly marketed to conservatives as anti-antifa legislation in a bid to have them support it, the legislation will undoubtedly land right-wing demonstrators in prison, too.

After all the hype, though, even if the bill doesn’t make the floor, the shrewd anti-leftist spin it has touted will surely be a useful midterm campaign asset in Donovan’s staunchly Republican Staten Island district.