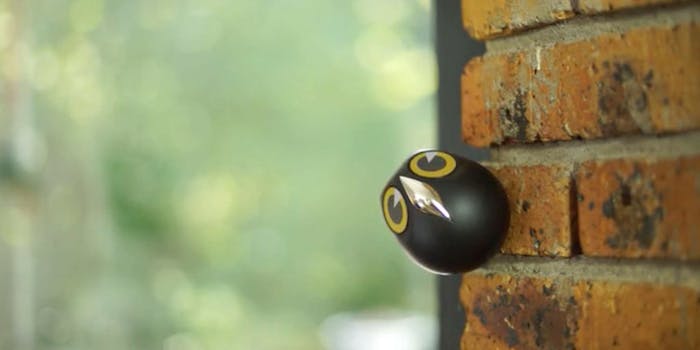 Ulo wants to be your own personal watch owl

We don’t live in the Harry Potter universe, but you can still have your very own owl to watch over you thanks to Ulo.

The Ulo is a connected security camera that keeps watch over your house while you’re away while hiding its purpose behind a cartoony appearance. Its small, pear-shaped build is accompanied by two giant, animated eyes that are sure to spook anyone who unexpectedly makes eye contact with it.

Behind those saucer plate peepers is a full-blown security suite built into the body of the bird. Beneath the beak is a 1080p HD security camera and motion sensor that is activated by any sign of unexpected activity. Inside the body is a speaker and microphone, orientation sensor, rechargeable battery, and WiFi module to keep Ulo connected.

Connectivity is especially important for this camera, as it is IFTTT compatible. Using the powerful tool for making devices and apps work together, you’ll be able to concoct recipes to make Ulo even more useful. For example, you can set up a system to save all video of motion detection to a Dropbox folder. Or, if you have a connected lighting system, unexpected movement captured by Ulo can trigger all the lights to be turned on.

But what really makes Ulo stand out is the eyes, which convey information about the device through their expression. Ulo’s eyes actively follow motion, appear droopy when the device’s battery needs a charge, and shine bright when Ulo is plugged in. They can also be modified via the app to change their color and appearance.

It’s when Ulo’s eyes are closed that it’s doing work, though. The eyes go dark when Ulo is in Alert Mode, which is engaged as soon as your smartphone is no longer connected to your home network. Once it’s on, any movement detected is captured by the camera, converted into GIF form, and sent to you via email. Ulo has already exceeded its fundraising goals on Kickstarter, where backers are able to snag one of the cute cameras for pledges as low as $111—though it won’t be delivered until late 2016. When Ulo hits retail, it will be priced at around $215.

That’s still cheaper than buying a real owl, which will sleep during the day instead of watching your house and probably just poop on all of your things. Also it’s illegal to keep an owl as a pet in the United States. Just save yourself all that hassle and get an Ulo.