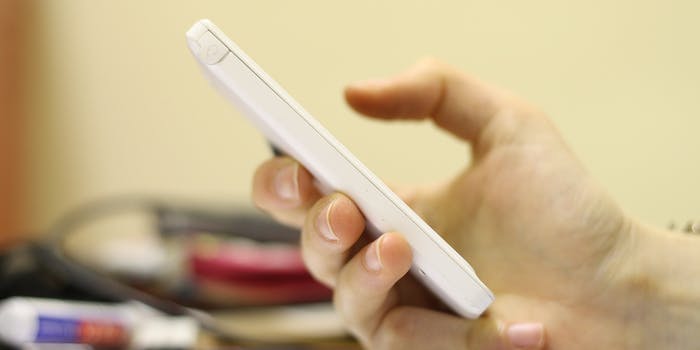 Are you texting your crush back too quickly? This site will let you know

Turning love into a math equation.

You’ve been waiting to hear back from your crush when your phone vibrates and their name appears on screen. Once your heart stops trying to fight its way out of your chest, you have to make the tough decision: how long should you wait to reply?

Ask the Internet and you’ll get a wide spectrum of suggestions, each with a detailed but mostly baseless explanation as to what different response times signify. You need to have a sextant, an abacus, and some graph paper on hand to work through the complex equations of dating math—and by the time you figure out the answer, you’ll have waited too long.

Lucky for you and all the other singles with their finger on the “send” button, a new site has boiled this complex situation down to a simple equation.

Txtwar presents users with a simple quiz to provide context to the situation. The answers feed into an algorithm that crunches the data and spits out an exact timeframe as to when to send off that next text.

Albert Chang created the site as a way to apply his data analytics background to the common dating dilemma. That, and it helped him get his friends off his back. “I was kind of tired of my friends asking me how long they should wait to text girls back (and I’m sure they were tired of me and asking them as well),” he told the Daily Dot.

Txtwar starts by asking your gender. (For now, the site is strictly heteronormative, though Chang notes on the site that “lesbian and gay tracks” are on their way.) From there it poses six questions that gauge the attractiveness of you and your crush, how much you like each other, and how long each party’s previous text response took.

Chang implemented a slider system for the questions of looks and likability that uses a seven-point scale. Chang explained he wanted to “use an odd number so you could truly have an average. Seven seemed large enough to give enough of a variation between the four questions.”

Once all the questions are answered, Chang’s algorithm goes to work to produce your suggested wait time. While the system is more scientific than Googling “how long should I wait to text someone back” and clicking on a link to Yahoo Answers, it is weighted by Chang’s own biases—he did create it so his friends would stop bothering him, after all, so it’s simulating his thought process.

Chang explained that the basic premise that drives the algorithm is, “the more you like someone, the more time you should wait” and the questions are processed in pairs and aim to “gauge if you’re ‘winning’ or ‘losing’ and by how much.”

“The more you’re ‘winning,’ the shorter amount of time you can afford to wait to text back,” he explained. “For example, if you are very good looking and don’t like the other person that much, you can text back faster, since it’s likely you don’t care too much about the outcome. If you’re ugly, the other person doesn’t like you that much, and you’ve been super available (or instantly replying) you will need to wait longer.”

The answers to the questions are used to devise a multiplier, which the algorithm uses against the baseline of the other person’s text time to determine the wait.

While it’s probably best not to take Txtwar’s suggestions totally serious, it is generating a serious amount of data. With over 130,000 responses so far (75 percent of whom identify as male), Chang has been wading through some of it and quantifying the results on the site’s blog.

Primarily, Chang has applied the information gathered by the texting calculator to tackle a dating tropes and has found that for the most part, people aren’t all that different regardless of ratings—with the exception of the extremes.

With all the data on hand, a viable answer eventually presented itself. Chang said he realized the people who put themselves on the bottom of the attractiveness scale were often waiting an incredibly long time to even receive a text they could reply to. “I think the 1/7 men waited an average of 14 hours for a reply, while everyone else hovered around one or two [hours],” he said.

Of course, all of this information is subjective and self-reported. If you think you’re unattractive, you might also think you left a bad impression when it’s possible neither of those things are true. Chang said he’s not worried about that skewing the data, though, “because it’s more about how you perceive yourself.”

Even if you set aside the subjective responses, the information on response times serves as an interesting data point to compare to expectations. A 2013 survey conducted by JDate and Christian Mingle found that 60 percent of singles expect to receive a text response from their love interest within three hours, while 35 percent want to hear back within an hour. Women surveyed expected a slightly faster response time than the men.

This seems to be borne out by the findings of Txtwar, in which most respondents fell into the range of expectations—save for men who rated themselves a seven, who waited nearly five hours on average to reply.

That same survey also shows the potential power of a tool like Txtwar; it found that nearly half of all singles have become upset with their partner over their text response time.

The data collected by Txtwar is interesting, especially since it catches people at a potentially vulnerable time—they’re asking a computer algorithm when they should talk to a person they like for goodness sake—and asks them to boil down questions that require introspection into cold, hard numbers. Some answers are sure to be jokes and outliers, but others will be genuinely honest.

“The data I’ve been seeing so far has actually been making a lot of sense,” Chang said. “It really reiterates the idea that the algorithm was built on.”

But no matter how revealing the data might appear, it’s much more important to remember that the whole thing doesn’t actually matter. “Obviously this is all just for fun,” Chang said.