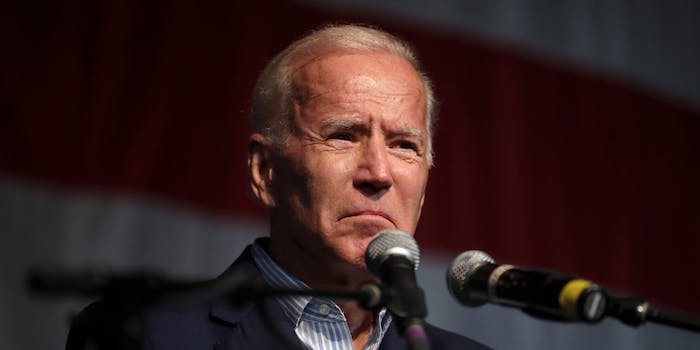 Biden has repeatedly brought up the cost of such a bill on the debate stage and campaign trail.

Former Vice President Joe Biden seemed to balk at supporting Medicare-for-all when asked whether he would veto such a bill during an interview that aired on Monday night.

MSNBC’s Lawrence O’Donnell asked Biden that if he were elected president and Sen. Bernie Sanders (I-Vt.) pushed a Medicare-for-all through Congress, would he sign it.

Biden seemed to be hesitant about the projected cost of such a bill and whether implementing it would affect citizens in the short-term.

“I would veto anything that delays providing the security and the certainty of health care being available now. If they got that through and by some miracle, there’s an epiphany that occurred and some miracle occurred that said, ‘OK, it’s passed.’ Then you got to look at the cost,” Biden said.

“I want to know how did they find the $35 trillion dollars? What is that doing? Is it going to significantly raise taxes on the middle class? Which it will. What’s going to happen? Look, my opposition isn’t to the principle that you should have Medicare. Health care should be a right in America. My opposition relates to whether or not: a.) it’s doable. Two, what the cost is and what the consequences for the rest of the budget are. How are you going to find $35 trillion dollars over the next 10 years without having profound impacts on everything from taxes for middle class and working class people as well as the impact on the rest of the budget?”

Medicare-for-all has been a major piece of policy that Sanders has pushed as part of his 2020 campaign. Biden has repeatedly brought up the possible costs of the move on the debate stage and on the campaign trail.

Many people took Biden’s remarks to mean that he would veto a hypothetical Medicare-for-all bill, even after it had done the difficult work of getting through Congress.

Others thought there was more nuance to his answer.

Whichever you believe, Biden seems content walking a very fine line of saying he supports the principle of Medicare-for-all, but if it passed Congress—a very high hurdle—he wouldn’t be excited about that.