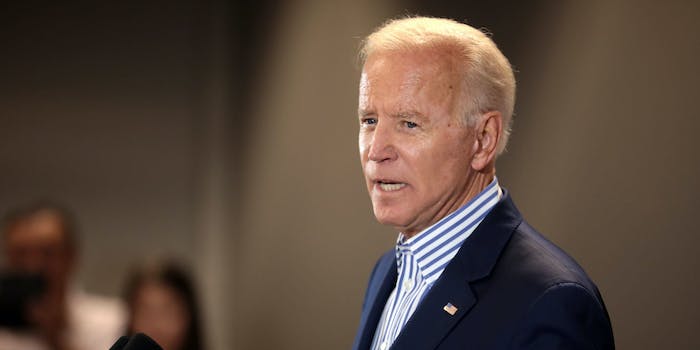 He's too far left or too far right depending on who you ask.

Biden’s recent string of primary wins, beginning with Super Tuesday, have both conservatives and Sanders supporters taking to Twitter in full-on panic mode.

For conservatives, Biden is too liberal. To Sanders’ supporters, he’s not liberal enough. Their cumulative displeasure inspired such hashtags as #LoseWithBiden, #NeverBiden, and #BidensCognitiveDecline.

In the former camp, conservatives are criticizing Biden for pivoting too far left in an effort to appeal to the progressive wing of the Democratic party.

The bill, often abbreviated to AB5, extends employee status to people in the gig economy, such as rideshare drivers.

Other conservatives criticized Biden for tapping Beto O’Rourke as a surrogate, whom they view as an extremist on gun control.

Then there’s Sarah Huckabee Sanders. This morning, the former White House Press Secretary of not holding press conferences went on Fox News and said with a straight face, “He’s extremely liberal … Joe Biden is no moderate.” She then rattled off a bunch of “facts” about Biden’s extremism that demonstrated a relationship with the truth not unlike that of her former employer.

Bernie Sanders’ fans meanwhile, attacked Biden for not being liberal enough on issues such as Medicare-for-all.

Although Sanders’ supporters have at times bristled at being compared to Trump supporters, the anti-Biden sentiment flooding Twitter undeniably united both sides.

But Biden’s string of successes have led others to the realization that moderate Democrats do, in fact, exist, no matter what Twitter leads people to believe.

They just may be older than Sanders’ base of support.

The next Democratic presidential debate will be held this Sunday, March 15. Two days later, on March 17, four of the nation’s largest battleground states hold their primaries: Florida, Illinois, Arizona, and Ohio.