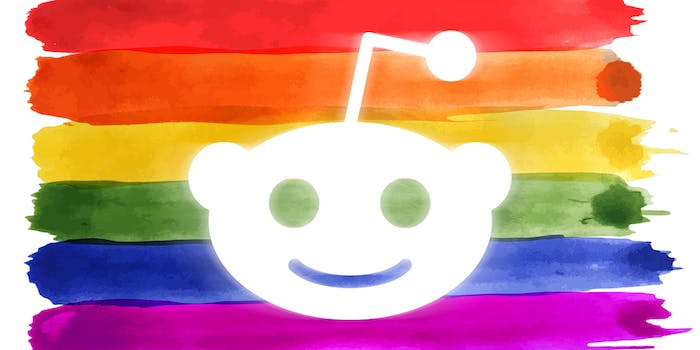 The term is covered by other major platforms' hate speech policies.

An influential subreddit recently posted a list of terms and examples of language it says are prohibited under Reddit’s hate speech policies. The post attracted intense interest for stating that “groomer” is governed under this policy. “Groomer” is often used as a slur to falsely equate LGBTQ individuals and the community with pedophilia.

Hateful attacks on LGBTQ people have significantly escalated of late. In May, President Joe Biden warned of “rising hate and violence” against LGBTQ people.

Many believe that influential right-wing social media users are a key driving force behind this increase. Hate speech exists on all platforms, but many take particular issue with Twitter and believe it is allowing anti-LGBTQ hate speech to proliferate, potentially leading directly to real-world harm. Although the company’s policies prohibit hate speech against people on the basis of sexual orientation or gender identity, many say its enforcement is woefully inadequate.

As proof, many point to prominent conservative Twitter accounts essentially dedicated to vilifying LGBTQ people by calling them “groomers” to falsely imply that there’s a link between being LGBTQ and pedophilia. The thinking is that these accounts would be banned if Twitter enforced its policies.

Reddit, TikTok, and Meta (Facebook and Instagram’s parent company) all confirmed to the Daily Dot on Wednesday that baselessly calling LGBTQ people or the community “groomers” or accusing them of “grooming” is governed under their policies prohibiting hate speech. Google, which owns YouTube, didn’t immediately respond to a request for comment.

Reddit became the focus of a conversation about policing the term after a moderator of r/PoliticalCompassMemes (PCM) informed their 550,000 subscribers that the platform had reached out to remind them to enforce its policies. Writing on behalf of all the moderators, on July 13, moderator theotherotherhand wrote, “We have been contacted by the admins. It is necessary that we request you tone back your language and make a shift away from certain types of memes.”

The post included a list of examples of types of memes and language that they want subscribers to stop posting, such as violent threats, slurs, slur evasions, and posts that generate hate against certain groups.

One line item on this list set off a chain reaction that reverberated across Reddit: “No portraying LGBT people as a whole as ‘groomers’ or ‘pedophiles,’ calling them a slur, or deadnaming them.” (“Deadnaming refers to using a transgender person’s pre-transition name.)

Speaking on condition of anonymity, one of PCM’s moderators told the Daily Dot on Wednesday that Reddit didn’t provide them with the list. “We mostly figured out the words via extrapolation,” they wrote via direct message. “When we asked for a precise list, the admin responded that they weren’t able to provide one.”

PCM’s post caught the attention of a redditor who posted about it in r/AgainstHateSubreddits. They wrote victoriously that the subreddit is “finally being required directly by Reddit administration to enforce Reddit Sitewide Rule 1.” Rule 1 prohibits bullying, harassment, and inciting hate or violence against vulnerable individuals and groups.

They further opined that this is noteworthy because the platform “now classes speech which calls LGBTQ people pedophiles or ‘groomers’ as HATE SPEECH.”

“Groomers” may have already been governed by Reddit’s terms. Nevertheless, these posts prompted additional coverage and commentary.

Media Matters’ tweet linking to the article was swiftly brigaded by people angered by the thought of not being able to categorically refer to LGBTQ people and the community as pedophiles. As of this writing, it has 10 times as many comments as it does likes.

A significant number of the commenters referred to Media Matters as “groomers,” which arguably reinforces its point.

In response, some falsely claimed that the term “groomer” is categorically prohibited on Reddit. Under the platform’s terms, calling a person who grooms animals a groomer wouldn’t be classified as hate speech; nor would accurately referring to a person convicted of pedophilia as a groomer.

In reality, all the hullabaloo about whether “groomer” is or should be policed by social media platforms as anti-LGBTQ hate speech was kicked off by one subreddit’s interpretation of Reddit’s policies.

Some may inaccurately call it censorship or attempt to obfuscate the issue with straw man arguments, but many are relieved that there is some recourse for falsely calling people pedophiles merely because of their sexual orientations or gender identities.

The debate centers on whether people think that social media platforms should allow unfettered speech—potentially including racial slurs, homophobia, and calls for violence—or aim to be more welcoming environments by governing hate, harassment, and abuse while also allowing for a wide variety of expression. The largest social media platforms have largely chosen the latter course, which requires them to strike an undeniably difficult balance between allowing users to express themselves freely and protecting them from others’ hate and abuse.

Reddit confirmed to the Daily Dot that they reached out to PCM, saying it often reaches out to communities about its polices and enforcement.

The discourse about Reddit and other platforms prohibiting using “groomer” as a slur for LGBTQ people has increased pressure on Twitter. Many believe that the platform is erring so far on the side of free expression on this issue that it’s creating an environment that’s toxic and harmful to LGBTQ people.

Although enforcing such rules is complicated, even some tasked with doing so are relieved to have more guidance.

“Honestly it’s becoming really complicated keeping track of what is banned and what isn’t,” the moderator from the PCM subreddit said on Wednesday.

Update 4:26pm CT: In a statement to the Daily Dot, a PCM moderator said, “Our role as moderators is to ensure that Reddit [Terms of Service] are enforced on the subreddit. TOS expectations are not always clear from the relatively incomprehensive Reddit sitewide rules. We did ask the admins for a list and a more comprehensive set of expectations, we were told that they ‘aren’t able to provide’ that. We reviewed the actions of the admins, took note of what words they were removing, and compiled the list of words and some terms when used in certain ways we thought were over the line.”