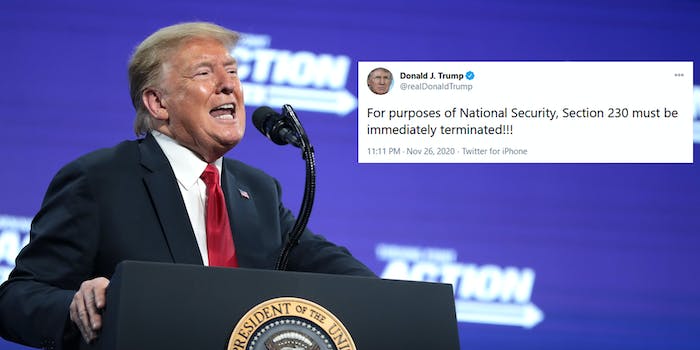 As #DiaperDon trends, Trump calls for Section 230 to be revoked over ‘national security’

Trump's lashing out at Section 230 continues.

President Donald Trump, seemingly upset that his tiny desk was being memed on Twitter, lashed out against the social media company on Thursday night, eventually saying that an important internet law needed to be revoked “for purposes of national security.”

The president’s tweet was referring to Section 230 of the Communications Decency Act. The law shields websites from being held liable over the content posted by users. It’s been hailed as a vital internet law in the rise of the modern internet.

Despite this, Trump, President-elect Joe Biden, and members of Congress on both sides of the aisle have criticized the law. Meanwhile, experts and tech advocates have said changes to it could have wide-reaching ramifications on the internet.

The president’s fixation on the law stretches back months, and he signed a social media executive order that targets Section 230.

But the president’s latest lashing out came around the same time as his remarks from a tiny desk on Thanksgiving night sparked a flurry of memes and hashtags, leading to “Diaper Don” and “Resolute Desk” to trend on Twitter.

“Twitter is sending out totally false ‘Trends’ that have absolutely nothing to do with what is really trending in the world. They make it up, and only negative ‘stuff’,” Trump tweeted late Thursday. “Same thing will happen to Twitter as is happening to @FoxNews daytime. Also, big Conservative discrimination!”

“For purposes of National Security, Section 230 must be immediately terminated!!!” the president wrote.

Besides the social media executive order, Trump has tried to push against Section 230 in other ways.

The president nominated Nathan Simington to the Federal Communications Commission (FCC), and it has been fraught with controversy.

Simington had a hand in working on Trump’s executive order at the Commerce Department’s National Telecommunications and Information Administration (NTIA).

Simington was nominated shortly after Trump revoked the re-nomination of Michael O’Rielly, a Republican commissioner who raised concerns about the FCC’s authority to carry out Trump’s executive order.

Simington is scheduled to have a vote by the Senate Commerce Committee next week on whether or not to advance his nomination to the full Senate.