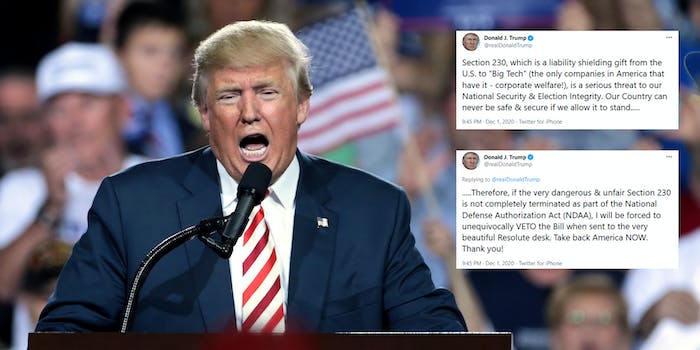 President Donald Trump threatened on Tuesday night to veto a defense spending bill unless it contained a provision that “terminated” Section 230 of the Communications Decency Act.

Section 230 is an important internet law that shields websites from being liable over content posted on them by users. It’s been hailed as “one of the most valuable tools for protecting freedom of expression and innovation on the internet,” but has come under fire from lawmakers on both sides of the aisle—including a parade of bills, hearings, denouncements, and an executive order from Trump.

Experts and advocates have warned that changes to the law could have major ramifications for the internet, with Reddit telling the Federal Communications Commission (FCC) that tinkering with the law “would change the very trajectory of the internet.”

Trump’s desire for the inclusion of a Section 230 repeal in the National Defense Authorization Act was hinted at last month when the New York Times reported that White House Chief of Staff floated the idea of a repeal within the spending bill as a way to please Trump.

Since then, Trump has repeatedly said that Section 230 was a threat to “national security” without elaborating how that was the case.

He continued that line of thought on Tuesday night, adding his threat of a veto.

“Section 230, which is a liability shielding gift from the U.S. to “Big Tech” (the only companies in America that have it – corporate welfare!), is a serious threat to our National Security & Election Integrity. Our Country can never be safe & secure if we allow it to stand…..” Trump wrote in a series of tweets on Tuesday night. “…..Therefore, if the very dangerous & unfair Section 230 is not completely terminated as part of the National Defense Authorization Act (NDAA), I will be forced to unequivocally VETO the Bill when sent to the very beautiful Resolute desk. Take back America NOW. Thank you!”

Sen. Ron Wyden (D-Ore.) responded to Trump’s desire for a Section 230 repeal to be part of the spending bill by tweeting: “I’d like to start for the Blazers, but that’s not going to happen either.”

The president’s tweets came just ahead of the Senate Commerce Committee holding a vote on Wednesday on whether to advance Trump’s nomination of Nathan Simington to the FCC to the full Senate.

Simington has been a controversial choice to be on the agency because of his connections to Trump’s social media executive order that targets Section 230.

Simington insisted last month that he had a “minor” role in writing the executive order, however, Politico reported that he emailed Fox News asking for the network to push the order so it would “help to get the FCC on board more quickly and thereby ensure a freer, fairer social media landscape going into the elections this fall.”

Besides Simington’s views on Section 230, his confirmation could deadlock the FCC in a partisan 2-2 tie to begin President-elect Joe Biden’s tenure in the White House. That tie would hinder any party-line actions, such as restoring net neutrality rules.