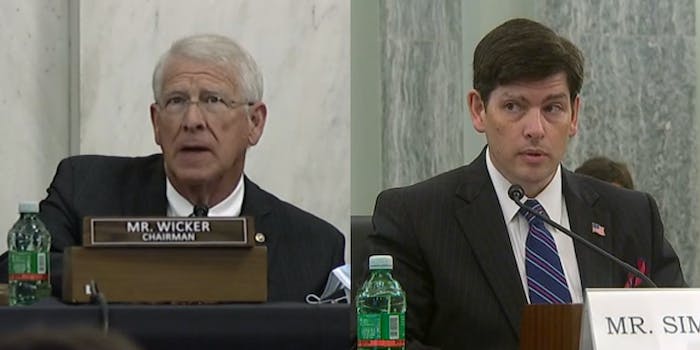 Nathan Simington's nomination to the FCC has been fraught with controversy.

The Senate Commerce Committee voted on Wednesday to move forward the nomination of Nathan Simington, President Donald Trump’s pick for a spot on the Federal Communications Commission (FCC).

The vote was 14-12, with Republicans voting in favor of moving the nomination forward and Democrats voting against it. Simington will need a full vote in the Senate to be appointed to the agency.

Simington has been a controversial choice because of his connection to Trump’s social media executive order that targets Section 230 of the Communications Decency Act.

Section 230 is a vital internet law that shields websites from being held liable for what is posted on them by users. While lawmakers have set their sights on the law, numerous tech advocates and experts have warned that changes to it could have enormous ramifications online.

Meanwhile, Simington has insisted that he had a “minor” role in crafting Trump’s executive order. However, Politico reported last week that he sent an email to Fox News asking for the news outlet to push the order and try and drum up support for the FCC to move forward with it.

In her opening remarks, Sen. Maria Cantwell (D-Wash.), the ranking member of the committee, pointed out Simington was nominated by Trump shortly after he revoked the re-nomination of Michael O’Rielly.

O’Rielly’s re-nomination was revoked shortly after he raised concerns about whether the FCC had the authority to carry out Trump’s social media executive order.

“I do not support his nomination,” Cantwell said.

Meanwhile, Sen. Richard Blumenthal (D-Conn.), who grilled Simington at a hearing earlier this month, said he feared that the nomination was meant to deadlock the FCC in the beginning of President-elect Joe Biden’s tenure in the White House.

“What’s at stake here is more than just a single nominee or any particular issue, it is in fact the independence of the FCC. Mr. Simington has stated his position, indeed has worked on an issue that will come before the FCC. His independence is very much in dispute and that’s why I’ve asked him to recuse himself on issues related to Section 230,” Blumenthal said.

“But more broadly, it is the independence of this agency itself that is at stake. I fear the outcome of this nomination will be in fact a deadlock of the commission in the middle of a national crisis. Perhaps the telecommunications and media companies want that kind of deadlock, they may wish for an FCC that is absent and neutralized. We face right now a national emergency … that requires this independent agency to be more active than ever in protecting consumers and our telecommunications.”

The senator’s fear of a deadlocked FCC is not unfounded. FCC Chairman Ajit Pai announced earlier this week that he would step down from the agency on Jan. 20.

If Simington is confirmed to the FCC, Pai’s departure would leave the agency in a 2-2 split—two Democrats and two Republicans. If Republicans are able to win the Georgia Senate runoff elections, they could block any nominee Biden chooses for the FCC.

The FCC is supposed to have five members, with three from the president’s party and two from the other party.

A partisan deadlock would prevent any party line votes, such as restoring net neutrality rules.

“The committee didn’t need to participate in this Trump temper tantrum. Simington is a poor candidate by any metric, and today’s vote reflects alarming contempt for both the agency he may be foisted upon and the public that agency is meant to serve,” Matt Wood, the vice president of policy and general counsel at Free Press Action, said in a statement.

“The Senate must reject this nominee out of hand, even if Leader McConnell is obstinate enough to waste floor time on this exceptionally unserious human stumbling block. And any member of the tenuous Republican majority in the Senate should think twice before prioritizing industry pipe dreams and purposeful gridlock over the serious work the FCC must do to help their constituents back at home.”

Digital rights group Fight for the Future, which has started a campaign for people to tell senators to reject Simington’s nomination, called the committee’s vote “shameful” in a tweet.

“BREAKING: in an unprecedented move the Senate Commerce Committee just voted to advance the nomination of Trump’s FCC nominee, Nathan Simington. The sole purpose of this vote is to kneecap the FCC in the middle of a pandemic and delay the restoration of net neutrality. SHAMEFUL,” the group tweeted.