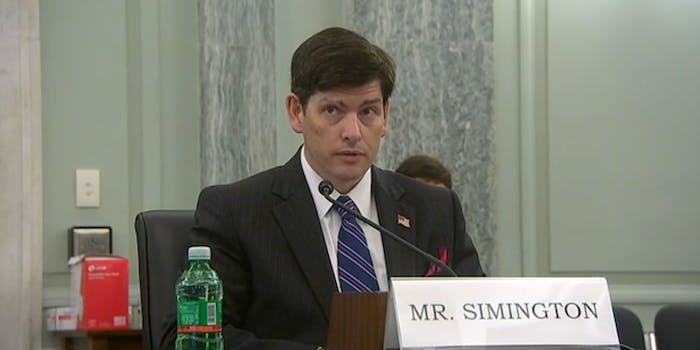 Simington has been a controversial choice by Trump.

Despite Joe Biden being projected to win the presidency, Senate Republicans on Tuesday went ahead with a confirmation hearing for President Donald Trump’s choice to fill a seat on the Federal Communications Commission (FCC): Nathan Simington.

Simington had a confirmation hearing before the Senate Commerce Committee on Tuesday.

Sen. Richard Blumenthal (D-Conn.), serving as the acting ranking member of the committee, started it off by saying he feared that Simington was sent to the FCC on “a mission to execute” President Donald Trump’s controversial social media executive order that targets Section 230 of the Communications Decency Act.

Section 230 shields websites from being held liable over the content posted on them by users. It’s been hailed as a vital law in the evolution of the modern internet, and advocates have warned that changing it could have far-reaching consequences.

Despite this, the law has become a target of lawmakers on both sides of the aisle—including Trump and President-elect Biden.

Given Trump’s order, and Simington having a part in it being crafted, Section 230 and the FCC took center stage on Tuesday at the confirmation hearing.

“I’m very concerned you have been sent to the FCC on a mission to execute that order—in fact President Trump tweeted just this afternoon ‘we need action now on this very important nomination,'” Blumenthal, who has worked on bills that also target Section 230, said in his opening remarks. “As you may know, it’s not that often that the president of the United States tweets about a nominee appearing before a committee that very afternoon, which seems to make clear what he hopes and expects from you. Which I think should trouble us on this committee and the Senate. The FCC cannot be simply an instrument of political policy or bullying.”

Ultimately, Blumenthal said he would likely put a hold on Simington’s confirmation. A hold is a request from a senator to delay a nomination. As a reporter for the National Journal notes, while Republicans could work around it, the effort may not be worth it considering the lame-duck period of Congress. Communications Daily reported last week that to overturn the hold, it would require a cloture motion and floor time.

Simington, currently a senior adviser at the National Telecommunications & Information Administration (NTIA), has been a controversial choice by Trump.

Trump nominated him to replace Michael O’Rielly, a Republican FCC commissioner, who had his re-nomination withdrawn by the president shortly after he raised some concern about the agency’s authority to carry out Trump’s social media executive order.

Simington did not mention Section 230 in his opening remarks but did talk about it during questions from lawmakers.

While O’Rielly’s concerns with the social media order may have led to his ouster, Simington’s relationship with Trump’s order may have been central to him being chosen.

At the NTIA, which filed a petition for rulemaking with the FCC in late May that was eventually accepted by the agency, Simington “had a hand” in crafting Trump’s social media order, according to the Washington Post.

On Tuesday, Simington said he had a “minor” role in the crafting of the order, but once it became clear he would be nominated, he “ceased any active work” on it. He also said he spoke with members of the president’s staff about Section 230 and estimated his work on the NTIA petition to the FCC as “five to seven percent.”

Blumenthal asked Simington whether he would consider recusing himself from votes regarding Section 230 if he was confirmed to the FCC.

In response, Simington said that would be “premature.”

The Connecticut senator said unless Simington agreed to commit to a recusal, he would put a hold on Simington’s confirmation—which could end it, given the timing before President-elect Biden takes office.

Near the end of the hearing, Simington also said he opposed internet service providers (ISPs) being classified under Title II of the Communications Act, in effect saying he opposed net neutrality rules passed by the FCC in 2015.

While Biden would be able to choose a chairman for the FCC, Pai also needs to step down—as is tradition. The FCC is made up of five commissioners: three from the president’s party and two from the opposing party.

The FCC also has two upcoming meetings before Biden’s inauguration, meaning that the Section 230 executive order could potentially be voted on by then. Given that Simington helped craft the order, it’s likely he will vote in favor of it. Pai and Commissioner Brendan Carr have signaled their support for the order. The two Democrats at the agency have spoken out against it.

That appeared to be on Trump’s mind on Tuesday afternoon, where he tweeted about Simington ahead of the hearing.

“Nate Simington, a very smart and qualified individual, is having his Senate hearing today. Republicans will hopefully confirm him to the FCC ASAP! We need action NOW on this very important nomination!! @SenatorWicker @MarshaBlackburn @senatemajldr,” Trump wrote.

But those feelings weren’t the same as tech policy advocates.

Evan Greer, the deputy director of Fight for the Future, called Simington “even worse than Ajit Pai.” The group launched a campaign for people to call senators to reject Simington’s nomination to the FCC.

“The Senate should reject Simington’s nomination post haste,” Greer said in a statement. “Ajit Pai should step down and fade into obscurity as a cautionary internet meme. And the Biden/Harris administration should act quickly to appoint a new chair of the FCC who will restore net neutrality, defend the First Amendment, and fight for Internet access, freedom, and privacy for all.”

Meanwhile, Access Now, a tech advocacy nonprofit, tweeted that Simington would be “one of the worst, most dangerous FCC commissioners the U.S. has ever seen.”