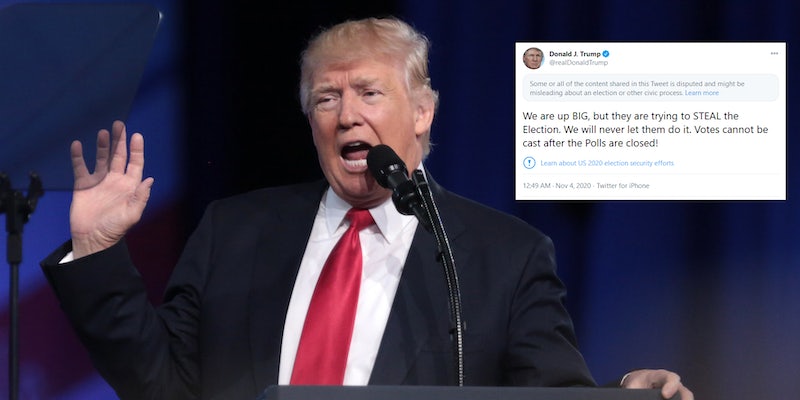 Twitter has labeled a tweet from President Donald Trump where he claimed that Democrats were trying to “steal” the election.

Trump tweeted early Wednesday morning, insisting that he was winning “big” despite the fact that the presidential election has not been called. Several important states, like Arizona, Michigan, Wisconsin, and Pennsylvania have not been called for either candidate, as mail-in ballots continue to be counted.

While Trump is leading in some of those states—as of early Wednesday morning—it is believed that many of the uncounted mail-in ballots will be votes for Biden, which would certainly narrow, or flip, Trump’s current leads.

Despite this, Trump claimed that Democrats would “steal the election.”

“We are up BIG, but they are trying to STEAL the Election. We will never let them do it. Votes cannot be cast after the Polls are closed!” the president tweeted.

Trump deleted an earlier version of the tweet where he misspelled “polls,” instead writing “poles.”

Twitter on Monday reminded users that it would take action against misleading election tweets. It also said it would label tweets that declare victory in the election prematurely.

Shortly after Trump’s tweet, Democratic nominee Joe Biden also chimed in, saying that it was neither of their “place to declare the winner of this election.”