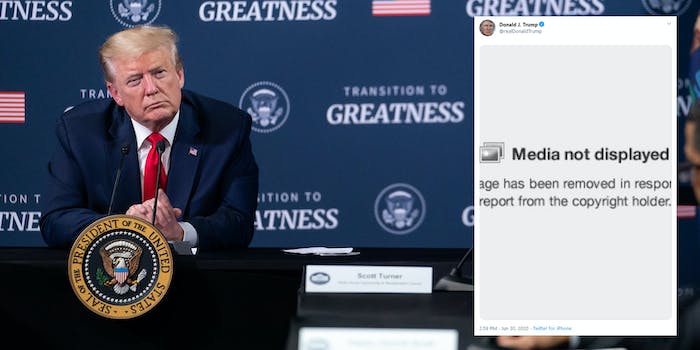 Twitter takes down photo posted by Trump after copyright claim

The photo was from the 'New York Times.'

Twitter removed an image shared by President Donald Trump on Wednesday after receiving a copyright claim.

The president on Wednesday afternoon shared a black and white image of himself that was turned into a meme that reads “they’re not really after me, they’re after you, I’m just standing in their way.”

The portrait of him was taken by a New York Times photographer for a feature they wrote about Trump in 2015 during his presidential campaign.

“Per our copyright policy, we respond to valid copyright complaints sent to us by a copyright owner or their authorized representatives,” a Twitter spokesperson told the Daily Dot.

Axios first reported that Twitter had received a Digital Millennium Copyright Act (DMCA) complaint from the Times about the photo being shared by the president. A complaint by the Times can be seen on the Lumen Database, a website that tracks requests for removal of content online.

The president’s tweet now features a grey box that reads: “Media not displayed. This image has been removed in response to a report from the copyright holder.”

The removal of the image is just the latest in a number of actions Twitter has taken against Trump in recent weeks.

Several of Trump’s tweets have been flagged for violating the social media giants polices around abusive behavior, manipulated media, glorifying violence, and have been fact-checked.

Amid all of this, the president has signed a social media executive order that targets websites liability shield. The order is already facing a legal challenge that argues it is unconstitutional.

Earlier this week Twitch, the popular streaming website, announced that it had temporarily suspended Trump’s account for violating its policies surrounding “hateful conduct.”