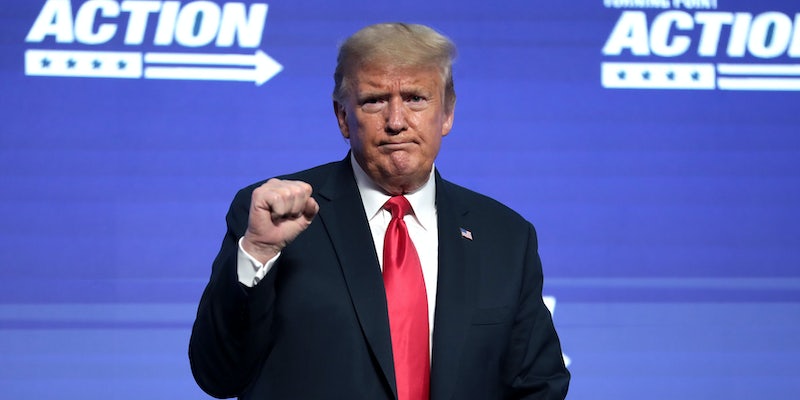 The streaming platform referenced two streams from the president that violated their rules.

Twitch, which is owned by Amazon, said recent streams violated their policies, including a re-broadcast of his infamous presidential kickoff in 2015 where he called people in Mexico “rapists,” and his recent rally in Tulsa, Oklahoma, where he made up a story about a “tough hombre” going into someones home.

“Hateful conduct is not allowed on Twitch. In line with our policies, President Trump’s channel has been issued a temporary suspension from Twitch for comments made on stream, and the offending content has been removed,” a Twitch spokesperson said in a statement to the Daily Dot.

The president’s account currently has a label that reads: “Sorry. Unless you’ve got a time machine, that content is unavailable.”

Twitch’s community guidelines for hateful conduct defines it as “any content or activity that promotes, encourages, or facilitates discrimination, denigration, objectification, harassment, or violence” based on a number of things including: race, ethnicity, religion, and sexual orientation.

The president launched his channel on Twitch late last year.

Twitter has placed warning labels and fact-checked several of the president’s tweets.

Facebook recently said it would do something similar for posts, including from politicians, after facing criticism for its more lenient policies surrounding the president.