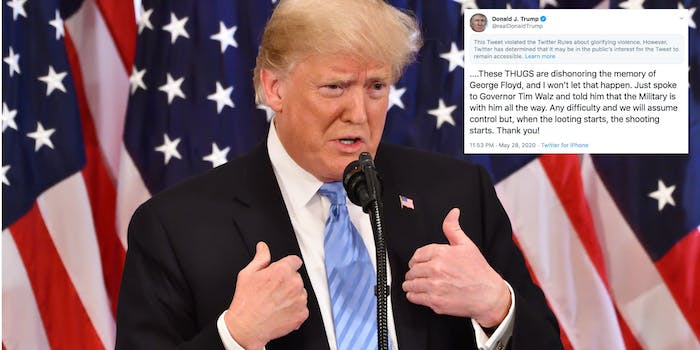 Protests in Minneapolis boiled over on Thursday, ultimately resulting in the destruction of a local Target and a police precinct. In response, President Donald Trump tweeted that “when the looting starts, the shooting starts.”

This sentiment was flagged by Twitter as “glorifying violence,” and the tweet is now hidden behind a warning.

Protesters are demanding justice for George Floyd, yet another Black victim of excessive police force. A viral video shows the minutes leading up to his death as a police officer kneels on his neck despite Floyd saying several times that he couldn’t breathe.

The officers are under investigation for their roles in Floyd’s death, but a recent warning from prosecutors fueled the flames of protesters’ ire. Prosecutors warned there is “evidence that does not support criminal charges,” indicating that the men responsible may walk free. Following the warning, protests transformed into riots and looting.

In a tweeted response to the escalating situation, the president placed the blame entirely on Minneapolis mayor Jacob Frey.

“I can’t stand back & watch this happen to a great American City, Minneapolis. A total lack of leadership,” the president wrote. “Either the very weak Radical Left Mayor, Jacob Frey, get his act together and bring the City under control, or I will send in the National Guard & get the job done right.”

It was his following tweet, however, that urged Twitter to place a warning. Before you can view the offending message, you first must navigate past Twitter’s warning.

“These THUGS are dishonoring the memory of George Floyd, and I won’t let that happen,” the tweet begins. “Just spoke to Governor Tim Walz and told him that the Military is with him all the way. Any difficulty and we will assume control but, when the looting starts, the shooting starts.”

The warning, which is sure to rankle the president, sparked several new topics to trend on the platform. #GlorifyingViolence and #BanTrumpFromTwitter both began trending in the hours following the warning, as did #Charlottesville.

Entries into both #GlorifyingViolence and #BanTrumpFromTwitter decry the president’s statement and demand justice for Floyd. Many also praise Twitter for finally taking steps to combat the president’s often unchecked statements.

#Charlottesville, on the other hand, draws a comparison between Trump’s reaction to the Charlottesville protests—which resulted in a woman’s death—as opposed to the Minneapolis protests.

“Minneapolis protesters are ‘thugs,’ but the Charlottesville Nazis were some ‘fine people,'” one commenter noted. “Seems pretty black & white to me. Literally.”

There are, of course, those who disagree with Twitter’s decision. They’ve populated the trending hashtags with their own thoughts, typically in defense of the president. In response to naysayers, Twitter explained its move via a thread.

“This Tweet violates our policies regarding the glorification of violence based on the historical context of the last line, its connection to violence, and the risk it could inspire similar actions today.”

In response to the warning, the president lashed out early Friday morning. In a series of tweets, he accused Twitter of “regulating free speech” and of “targeting” him.

In what appears to be an attempt to side-step the “glorifying violence” warning, the official Twitter account for the White House retweeted Trump’s message. It also quoted the “when the looting starts, the shooting starts,” sentiment. Soon after the White House posted the tweet, Twitter placed the same warning on it.

Trump also shared the message, again with the threat intact, to his Facebook page.

Meanwhile, Facebook seems to have taken no action on Trump’s post, which is in-line with the stated policies of founder Mark Zuckerberg, who has criticized Twitter’s decision to fact-check Trump.