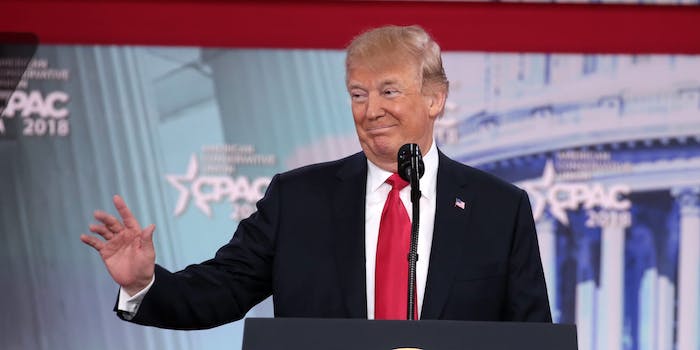 It's really his friend.

President Donald Trump signed a social media executive order on Thursday that, among other things, seeks to narrow the scope of one of the internet’s bedrock principles: Section 230 of the Communications Decency Act.

And on Twitter this morning, Trump all out called for it to be revoked.

The section essentially shields websites from being liable for what is posted on them by third parties. It’s been called “one of the most valuable tools for protecting freedom of expression and innovation on the internet.”

Specifically, it reads: “no provider or user of an interactive computer service shall be treated as the publisher or speaker of any information provided by another information content provider.”

The president’s criticisms come as Twitter has labeled two of his tweets with a fact-check and hidden one for “glorifying violence.”

However, in the midst of Trump’s attacks—people are pointing out that the president is actually benefiting from Section 230, because if it were revoked, it would likely prompt companies to take down posts that could subject them to being liable.

As the Electronic Frontier Foundation (EFF) explains, without Section 230 protections, websites would become aggressive in moderating messages to try and avoid legal issues.

“Given the sheer size of user-generated websites (for example, Facebook alone has more than 1 billion users, and YouTube users upload 100 hours of video every minute), it would be infeasible for online intermediaries to prevent objectionable content from cropping up on their site. Rather than face potential liability for their users’ actions, most would likely not host any user content at all or would need to protect themselves by being actively engaged in censoring what we say, what we see, and what we do online. In short, CDA 230 is perhaps the most influential law to protect the kind of innovation that has allowed the Internet to thrive since 1996.”

Tim Wu, who coined the term net neutrality, made the point on Thursday evening.

“The White House doesn’t seem to realize that if they succeeded – if Twitter was actually liable for the speech of its users (if 230 was repealed) – they’d be forced to take down the many defamatory posts of Donald Trump — Section 230 is actually his best friend,” Wu tweeted.

The American Civil Liberties Union (ACLU) also pointed it out.

“Ironically, Donald Trump is a big beneficiary of Section 230. If platforms were not immune under the law, then they would not risk the legal liability that could come with hosting Trump’s lies, defamation, and threats,” the organization tweeted.

For instance, Trump’s tweet earlier this week promoting a conspiracy about the death of an aide for Joe Scarborough would have likely been taken down, as it could have been deemed defamatory and Twitter could have faced a lawsuit over it.

Regardless, the executive order is unlikely to do much.

Experts have come out and said it would likely be challenged in the courts and would be unlikely to survive those legal challenges.