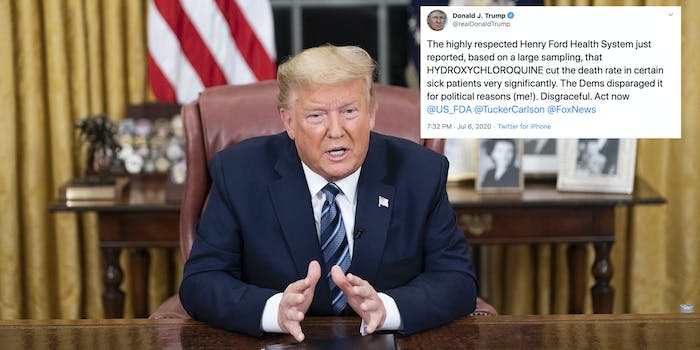 The President is back to promoting the drug, despite warnings.

President Donald Trump is back to hawking hydroxychloroquine as a coronavirus treatment, despite repeated and recent warnings about the anti-malaria drug from the Federal Drug Administration (FDA).

In May, Trump said he was taking hydroxychloroquine as a preventative measure, though there is no evidence that it offers such protection.

At that time, the drug was being studied for its potential effects on patients who had already contracted the virus, though there were doubts it offered any benefits and concerns that it might even cause more harm than help.

Still, Trump’s endorsement of the drug proved powerful, with supporters of the president attempting to get their own doses, whether by doctor or dark web.

In a tragic turn, an Arizona couple ingested a different chloroquine product after listening to the president, causing both to be hospitalized. The husband later died.

During the weeks since, the FDA and the World Health Organization (WHO) have halted their trials of hydroxychloroqine, with the FDA issuing a statement that it shows “no benefit for decreasing the likelihood of death or speeding recovery,” and that “dosing for these medicines are unlikely to kill or inhibit the virus that causes COVID-19.”

Just days ago, the FDA released a review of safety issues with the drug, which includes the serious issues some COVID-19 patients experienced after taking hydroxychloroquine, including “serious heart rhythm problems and other safety issues.”

There has been one recent study that came to a different conclusion, though—and that’s the one Trump chose to tweet about on Monday night.

“The highly respected Henry Ford Health System just reported, based on a large sampling, that HYDROXYCHLOROQUINE cut the death rate in certain sick patients very significantly. The Dems disparaged it for political reasons (me!). Disgraceful. Act now @US_FDA @TuckerCarlson @FoxNews,” he posted, tagging the FDA in the post.

“Considered in the context of current studies on the use of hydroxychloroquine for COVID-19, our results suggest that the drug may have an important role to play in reducing COVID-19 mortality,” said the study’s co-author, Dr. Marcus Zervos, who leads the division of Infectious Disease for Henry Ford Health System.

However, as CNN reported, other researchers have been critical of the study, pointing to issues with the sample population, including the choice of patients selected to receive the drug and the fact that a number of the participants are still hospitalized.

In a news conference, Dr. Steven Kalkanis, the CEO of the Henry Ford Medical Group, responded to the fact that these findings seemingly contradicted those of other studies, saying, “We also want to make the point that just because our results differ from some others that may have been published, it doesn’t make those studies wrong or definitely a conflict. What it simply means is that by looking at the nuanced data of which patients actually benefited and when, we might be able to further unlock the code of how this disease works.”

The lack of conclusive evidence in either direction hasn’t stopped the Trump administration from standing by the drug. The morning after Trump’s hydroxychloroquine-endorsing tweet, White House adviser Peter Navarro praised the drug on CNN.

“I can help save some lives here today by raising awareness about this medicine,” Navarro said Tuesday, adding, “Give peace a chance and give hydroxy a chance, it can save lives.”