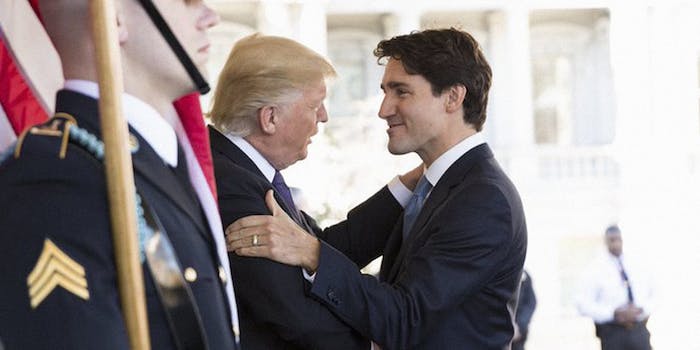 After what was a disastrous G-7 summit this weekend, with Donald Trump saying American allies had used the U.S. as their own personal piggy bank and refusing to sign a joint communique with the rest of the world’s powers, the administration has gone all in on attacking Canada.

On Sunday, Larry Kudlow, Trump’s top economic adviser, said Canada Prime Minister Justin Trudeau had “stabbed us in the back” while Trump aide Peter Navarro said “there’s a special place in hell for any foreign leader that engages in bad faith diplomacy” with the president.

Both interviews—Kudlow’s on CNN and Navarro’s on Fox News—were extraordinary in the way they full-heartedly attacked one of America’s biggest allies and trade partners.

That comes after Trudeau’s press conference on Saturday. After Trump left the summit early to fly to Singapore to meet with North Korean leader Kim Jong-un, Trudeau conducted a press conference in which he said Canada would not be pushed around by Trump’s tariff threats.

Responded Navarro: “There’s a special place in hell for any foreign leader that engages in bad faith diplomacy with President Donald J. Trump and then tries to stab him in the back on the way out the door. And that’s what bad faith Justin Trudeau did with that stunt press conference.

“That’s what weak, dishonest Justin Trudeau did and that comes right from Air Force One. And I’ll tell you this: To my friends in Canada, that was one of the worst political miscalculations of a Canadian leader in modern Canadian history.”

Peter Navarro: "There’s a special place in hell for any foreign leader that engages in bad faith diplomacy with President Donald J. Trump and then tries to stab him in the back on the way out the door…that’s what bad faith Justin Trudeau did with that stunt press conference." pic.twitter.com/KtqKXizBEc

The political community seemed stunned at the harsh language and attacks on Trudeau, whose country was blamed by Trump earlier this week for burning down the White House in 1812 (it was actually the British).

If you think the Canadians are our adversaries, you are doing something very, very wrong. https://t.co/tI6hJ2EFU6

The silence of Cong GOPers not named McCain is obviously not surprising anymore but is there any limit for them? It’s a fight with Canada and the rest of the G6, only the most important allies of this country. Is the rest of the GOP using “stunned silence” as their “comment”?

The thing is, I was at the @JustinTrudeau news conference, and he went out of his way to try to downplay tensions. He didn’t attack @realDonaldTrump in any way, other than restate Canada would retaliate for tariffs. Not sure what @larry_kudlow means re: “stabbed” US in the back

It's amazing that Larry Kudlow thinks he's helping the U.S.-Canada relationship, trade negotiations, and the Singapore talks by trashing an ally.

I, for one, would definitely cut a deal with the United States after that.https://t.co/skyKbpit5X

On the plane from the G-7 to Singapore, Trump also personally attacked Trudeau, tweeting, “PM Justin Trudeau of Canada acted so meek and mild during our @G7 meetings only to give a news conference after I left saying that, ‘US Tariffs were kind of insulting’ and he ‘will not be pushed around.’ Very dishonest & weak. Our Tariffs are in response to his of 270% on dairy!”