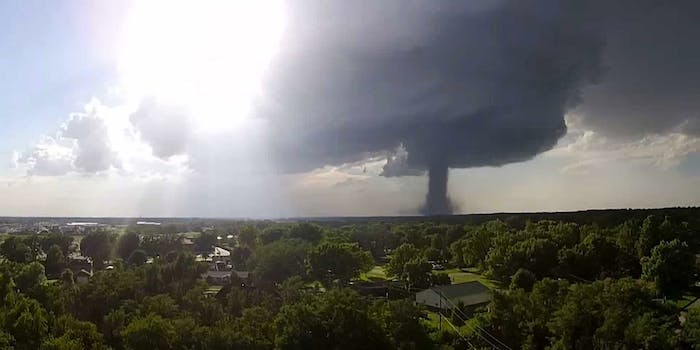 Welcome to the future of storm chasing.

On Monday, a severe thunderstorm rolled through south-central Kansas. According to reports, it downpoured up to three inches of rain. It also brought with it a massive EF-3 tornado that touched down in Reno County.

Stretching 350 yards across and spinning with winds up to 165 miles per hour, the stovepipe tornado tore across over 5 miles of land according to storm assessors.

While most in the towns of Hutchinson and Nickerson took cover from the storm, Justin Watkins decided to get a better look. He took his drone out and captured footage that looks like the opening shot of a natural disaster flick.

With a storm that size, there was bound to be some damage. Power lines and trees were torn down, and there reports of a farmhouse and cabin being destroyed, as well as damage to some roofs. Nearby towns of Arlington and Turon lost power during the storm. There were some reports of cars being lifted and tossed 30 feet.

Though the tornado encroached on a population center of nearly 50,000 people, no deaths or injuries have been reported from the storm.