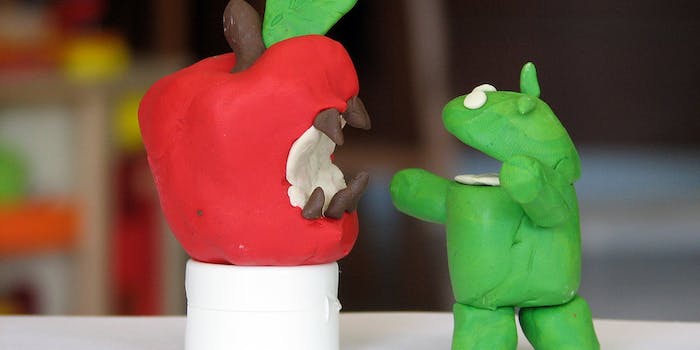 Commencement speakers are usually invited to address graduates because of their success and the hope that they’ll offer students sage wisdom about entering the real world. You can’t get much more successful than Tim Cook, the 54-year-old CEO of the most profitable company in the world. But in his commencement address at George Washington University this weekend, Cook didn’t just dispense advice; he also tossed out a dig at non-Apple smartphones.

Cook opened his address to the Class of 2015 with a joking piece of advice: Ditch your phone if it’s not an iPhone.

“Before I begin today, they asked me to make a standard announcement…about silencing your phones,” Cook said. “Those of you with an iPhone, just place it in silent mode. If you don’t have an iPhone, please pass it to the center aisle, Apple has a world-class recycling program.”

The quick zinger was met with laughs and some applause. The rest of the speech carried a more serious tone, as Cook discussed civil rights, equality, and the need to address global injustices. He invoked Martin Luther King, Jr., Apple founder Steve Jobs, and former President Jimmy Carter.

You can also see a drone’s-eye view of the commencement.