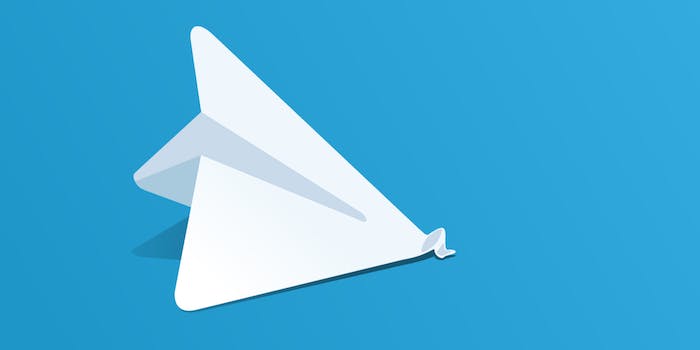 Wood isn’t the only one grappling with spam on his Telegram channel—though he does appear to be the only one who was spammed with pornography.

Numerous Telegram channels are littered with posts about working from home, buying bitcoin, and other potential scams.

“Really getting tired of coin ads that try to disguise as news articles. So much spam!” user Andre Stephens recently complained in the BandofBrothersQ channel. On the same channel, another said of spam links, “…[T]hey just multiply like wet gremlins when anyone touches them.”

QAnon conspiracy theorist Tracy Beanz posted that she moderates a lot of Telegram channels, where she sees “fake news and bs and spam and stolen crap.” She called it a “big issue,” and added, “It frustrates the hell out of me.”

There are many similar complaints and warnings on other channels.

Telegram does reportedly have software that flags spam. But based on the quantity of these posts in certain channels, such as Dan Scavino’s, there’s a lot it doesn’t catch. It appears to be up to the channel’s operators to police spam.

Telegram did not immediately respond to the Daily Dot’s questions on its spam problem.

Scavino’s channel has more spam content than most, a detail some may find ironic, as he previously worked as former President Donald Trump’s social media director, so should arguably be well-versed in social media management.

When the far-right flocked to the platform, it appears that spammers followed.

Telegram experienced an explosion of growth following the Capitol riot, and resulting purges of its participants and sympathizers from other social media channels. A week after the riot, Fortune reported that it was the one of the top two most downloaded free apps in both Google and Apple’s stores. Encrypted messaging app Signal was the other one.

Today Telegram is a haven for Proud Boys, QAnon believers, and other far-right groups and figures attracted to its more lax content standards. On Telegram they can post bigoted content, false information, conspiracy theories, and other things that most mainstream social media platforms prohibit—without fear of getting de-platformed. However, they may also have to contend with unwanted pornography and solicitations to invest in cryptocurrency.

It appears to be having some difficulty enforcing that last one.