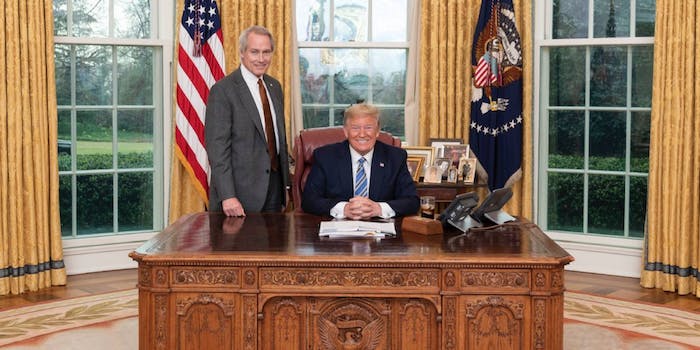 Although such claims are clearly false, Wood's followers believe his every word.

Far-right attorney Lin Wood is falsely claiming on Telegram that former President Donald Trump is still in the White House.

Wood, a prominent figure among believers of the QAnon conspiracy theory, made the outrageous claim on Wednesday to his more than 840,000 followers.

Wood began by claiming to be at the White House in search of current President Joe Biden, showcasing numerous photos of empty rooms.

The attorney went on to share a picture from the Oval Office which showed Trump sitting behind the Resolute desk, citing it as proof that the former leader remains at the helm.

“I was right. No Joey in the Oval Office. But I did run into our President of the United States,” Wood stated. “President Trump is hanging out and working in the office in which we re-elected him to serve in a historic landslide victory on November 3, 2020.”

As should be obvious, the photo featured by Wood is not new. In fact, the far-right figure had previously shared the exact same photo on Telegram in February. The photo was originally taken on March 11 of last year.

While the claim from Wood is obviously false to any rational person, the Telegram post is concerning given that a significant segment of Trump supporters genuinely believe that the twice-impeached ex-president is still in charge of the country. Not only that, many of Wood’s followers believe that Biden is no longer alive and that a body double has taken his place.

Conspiracy theories similar to these, such as the false claims of election fraud spread by Wood, are what ultimately led Trump’s supporters to storm the Capitol last January.

Telegram is one of the few social media outlets left where Wood can speak after the attorney was banned from Twitter in the wake of the failed insurrection.

Wood’s rantings aren’t just relegated to the online world. During a speech at an event in Myrtle Beach on April 23, Wood appeared to write out the letter “Q” with his finger before telling the crowd that Trump “never left,” a nod to the QAnon conspiracy.

“Donald J. Trump is still president of the United States of America, and don’t you forget it,” Wood falsely claimed. “Eighty million people said ‘we the people, we pick Donald J. Trump.’ He is your president, and the other side knows it, they know that soon their day is coming.”