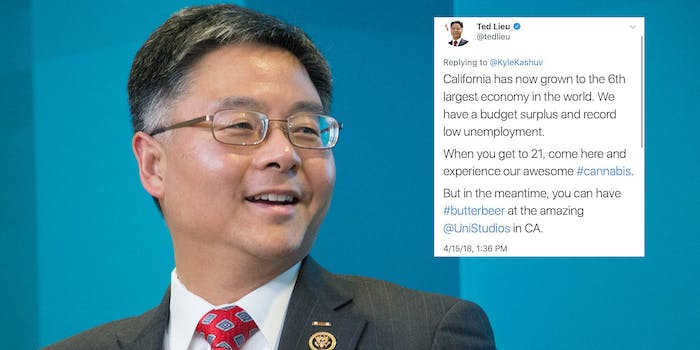 This is getting willfully misinterpreted.

Congressman Ted Lieu (D-Calif.) has received criticism for his suggestion that Kyle Kashuv, a Parkland shooting survivor and vocal gun rights advocate, get stoned in California.

Was I just encouraged by a Congressman to smoke weed when I am 21? Yes, legally, but still. Holy smikee, batman! pic.twitter.com/a2kExgeUPx

California's kakistocracy is collapsing after its lamentable journey https://t.co/FQVucNS4Co

People online thought it was a bit odd for a sitting congressman to suggest a teenager get stoned, even if he said Kashuv should wait until he’s 21.

If I were the parents of Kyle Kashuv I'd have local law enforcement tapping on Ted Lieu's door. https://t.co/PFeixW9Mrl

Others pointed out that those upset were being willfully misleading about the contents of Lieu’s tweet.

People will offer you to buy you a beer when you're 21.

Feel free to say no to anything which doesn't work for you.

Or, make this a thing for a minute for reasons known only to you. https://t.co/CdvsMPioXg

In response to the backlash, Lieu deleted the tweet and issued an apology. “While I am proud of California’s legal cannabis law, I can see why saying this to you can be misinterpreted because you are not 21,” he wrote. “I hereby apologize. You should listen to your parents.”

I have now read the comments to my response to you. While I am proud of California's legal cannabis law, I can see why saying this to you can be misinterpreted because you are not 21. I hereby apologize. You should listen to your parents. I will hereby delete the prior tweet.