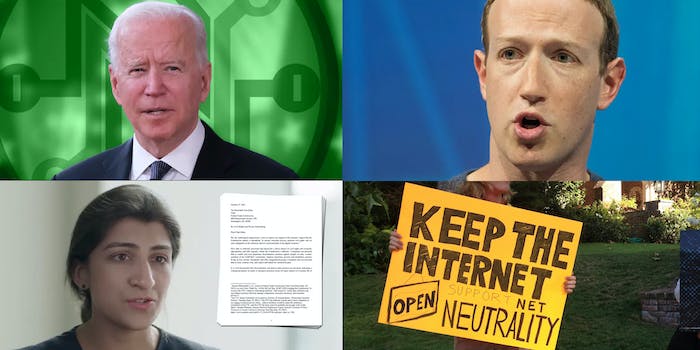 Tech newsletter: When can you expect net neutrality?

Biden finally filled the FCC. When can you expect net neutrality to be restored?

It finally happened. If you’ve been reading this newsletter for a while, you know that we’ve been reporting on the growing frustrations about President Joe Biden’s inaction at the Federal Communications Commission (FCC) for months.

Last week, he finally announced his nominees to fill out the agency.

A quick recap if you haven’t been keeping up: Biden inherited a deadlocked 2-2 FCC when he took office, and fairly quickly announced that Jessica Rosenworcel, a Democrat already on the commission, would serve as the acting chair.

Then, for months, Biden dragged his feet on doing anything else at the FCC—which as many noted, pushed back the timeline for a number of high-profile things the agency could do, like restoring net neutrality rules.

After months of waiting, Biden announced that he has nominated Rosenworcel for another term at the FCC and named her the full time chair. He also announced the nomination of Gigi Sohn, a prominent net neutrality and public interest advocate, to be the fifth commissioner at the FCC. (Side note: you can read the Daily Dot’s interview with Sohn from earlier this year if you want to read more about her thoughts about the FCC).

So naturally, the question becomes: Now that the waiting is over, what comes next?

As we reported late last week, restoring net neutrality rules and the FCC’s authority over the broadband industry is expected to be one of, if not *the* top priority for the new Democratic majority at the FCC once Rosenworcel and Sohn go through the confirmation process in the Senate.

That confirmation process could be pretty quick, mostly because the Senate is up against a ticking clock. Rosenworcel’s term technically ended last year, but rules have allowed her to stay at her post until the end of the current session of Congress, which ends in January.

If the Senate doesn’t confirm Rosenworcel and Sohn before then, Republicans could take a majority at the FCC. While that majority wouldn’t give them all that much power at the agency, it would bookmark what has been a slow-moving process from Biden that has recently seen frustration boil over the surface.

Assuming the Senate confirms Rosenworcel and Sohn by the end of December—something Sen. Maria Cantwell, the chair of the committee that would hold the hearings, has indicated will happen—experts told the Daily Dot they expect 2022 to be full of talk about net neutrality and the agency’s authority over broadband.

“The combination of the three Democratic commissioners there makes it very clear that broadband is going to be classified as a common carrier service next year. I think no one should waste time doubting that or horse racing the question because every commissioner that is appointed and sitting have all firmly confirmed that is what they believe is the proper way of regulating access,” Ernesto Falcon, a senior legislative counsel at the Electronic Frontier Foundation (EFF), told the Daily Dot. “Everything else that is relevant to broadband access stems from there.”

So while it’s been a long wait for Biden to finally fill out the FCC, it appears the next year could be busy at the agency. Stay tuned.

Meet Flippy, an autonomous robotic kitchen assistant that works with humans, instead of replacing them.

In a sector ripe for innovation, Miso Robotics is disrupting the $70B food service industry. Combining AI and robotics, Miso offers a needed solution to the current and future labor shortages.

Miso Robotics works with 10 of the top 25 brands in the quick-service restaurant industry and recently announced their latest partnership with Inspire Brands, parent company of Buffalo Wild Wings. Flippy Wings is expected to increase food production speeds by 10-20%.

Unlike other industry disruptors, you still have a chance to invest at the ground floor. Don’t wait — the offering closes on Nov 18.

“Over the past several years, Facebook has dramatically increased the amount of money we spend on content moderation overall,” the post states. “Within our total budget, hate speech is clearly the most expensive problem: while we don’t review the most content for hate speech, its marketized nature requires us to staff queues with local language speakers all over the world, and all of this adds up to real money.”

Numerous charts featured in the report show how the majority of spending comes from Facebook reacting to hate speech issues as opposed to proactive work on the issue. Reactive costs accounted for 74.9% of the money spent while proactive measures represented just 25.1%.

Facebook found that the majority of its reactive efforts—or roughly 80.56%—were tied up in enforcing its hate speech policies.

The paper suggests numerous options content moderators could potentially use to bring down costs, which include ignoring hate speech complaints deemed “benign” and “adding friction to the appeals process.”

In a statement to the Daily Dot, however, a Facebook spokesperson denied that the document called for “budget cuts” and claimed that no such cuts were made regarding its content moderation.

A collection of more than 40 civil rights, public interest, and internet rights groups are urging the Federal Trade Commission (FTC) to craft rules that address ‘the entire life cycle” of data and crack down on discriminatory and abusive data practices.

The groups wrote a letter to FTC Chairwoman Lina Khan where they urge the commission to respond to a “range of data harms” and establish “clear rules against discriminatory and abusive data practices.”

In the letter, the groups note that data collection and data sharing has an impact on civil rights, like when companies use personal data to “enable or even perpetuate discriminatory practices” against people of color, the LGBTQ community, low-income people, and other marginalized groups.

In September, a group of eight senators called on the FTC to “set clear safeguards” on the collection and use of personal data, saying that consumer privacy in the U.S. has become a “consumer crisis.”