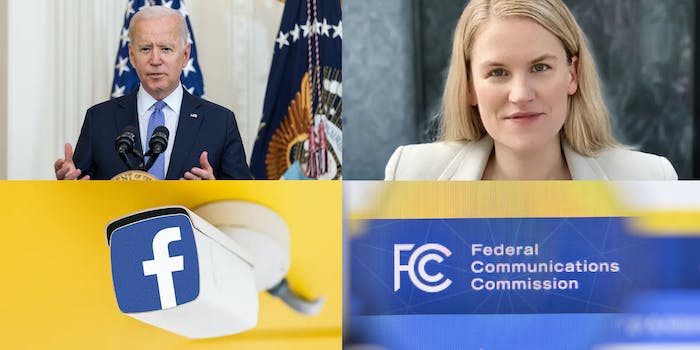 Here's a look at tech and politics news from the last week.

President Joe Biden’s delay in announcing his plans for what to do with the Federal Communications Commission (FCC) has left him close to what seemed unthinkable just months ago: His party losing a majority at the agency.

Biden has been historically slow in announcing who will permanently chair the five-person agency. That delay, as observers have noted, has already pushed back any potential big-ticket items the FCC is expected to tackle under Democratic majority, like restoring net neutrality rules.

There’s a long list of items people would like to see the FCC tackle, but it can’t realistically do it without a full agency, where any large decisions would take a party-line vote.

When taking office, Biden inherited a deadlocked 2-2 agency. Presidents have the ability to name a chair of the FCC and nominate commissioners, who are then confirmed by the Senate.

Despite near-constant pressure from public interest groups and others to fill out the agency since taking office, Biden has only named Jessica Rosenworcel, a Democrat, as the acting chair.

But eight months into his administration, Biden has yet to go further by either making Rosenworcel the permanent chair and nominating a fifth commissioner or nominating someone else to become chair of the agency.

While the delay has halted any movement on a number of different agenda items, Biden now faces another hurdle: If he waits much longer, he faces the possibility of the FCC having a 2-1 Republican majority in just a few months. Evan Greer, the director of Fight for the Future, called the situation a “nightmare scenario.”

“The current scenario is sort of already a nightmare, in the sense that we’re in the middle of a pandemic and access to affordable and open internet is more important now than ever before and the agency that is supposed to be overseeing that industry is effectively kneecapped,” Greer said, adding: “The even worse nightmare scenario is this ends up taking so long that we have a 2-1 majority of people at the FCC that are effectively shills for the telecom industry.”

Asking for help doesn’t come easy to many men, especially when it comes to sexual wellness. Hims understands the importance of privacy and connects you with online medical evaluations in the privacy of your home.

Their licensed providers help you find the affordable little pill for your treatment featuring the same active ingredient in Viagra®. Hims then discreetly delivers the medications you need to your doorstep if prescribed. 90% cheaper, but 100% as effective. If you aren’t satisfied, there’s a 60-day money-back guarantee.

Former product manager Frances Haugen, who first spoke to the Wall Street Journal, publicly came forward this weekend. Haugen has provided internal documents to media, lawmakers, and regulators that she says demonstrate that Facebook is aware of the harms it causes.

She believes it is unwilling to effectively address these problems because doing so will potentially reduce engagement and profits.

Haugen worked at Facebook for two years before leaving in May. She told the Journal that her initial goal was to help the company fix its weaknesses.

Advocacy group urges FTC to crack down on surveillance advertising

Accountable Tech, an advocacy group, is urging the Federal Trade Commission (FTC) to start a rulemaking process that would ban surveillance advertising.

In its petition, Accountable Tech notes that President Joe Biden signed an executive order in July that—among many other things—urged the FTC to craft rules that would address “unfair data collection and surveillance practices.” In light of that, the petition notes, the FTC should prohibit surveillance advertising “as an unfair method of competition.”

Surveillance advertising, the petition states, has “become a highly lucrative business model dependent upon pervasive tracking and profiling for the purpose of selling hyper-personalized ads.”

That kind of advertising, and the amount of data collected from it, “relies upon and cyclically reinforces monopoly power,” of big tech companies like Facebook and Google, the petition says.

In September, a group of Democrats also urged the FTC to start a rulemaking process that would strengthen consumer privacy.