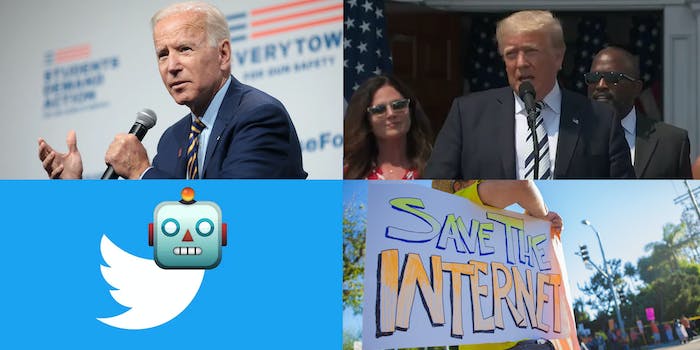 Biden’s call was part of a larger sweeping executive order attempting to promote competition in the country’s economy and combating corporate consolidation.

Net neutrality rules were adopted by the FCC in 2015 and prevent internet service providers (ISPs) from blocking, throttling, or using paid prioritization on internet speeds. The rules also classified ISPs under Title II of the Communications Act, which gave the FCC authority over the providers. All of that was undone in 2017 by the Republican-led FCC, which repealed the rules.

Specifically, Biden’s order “encourages the FCC to restore net neutrality rules undone by the prior administration.”

The inclusion of net neutrality in the order is significant and makes it clear that the administration supports reinstating the rules.

However, restoring net neutrality will not be possible without Biden filling out the FCC.

Currently, the agency is locked in a 2-2 deadlock along party lines. The agency is supposed to have five commissioners, and Biden can nominate someone to become another commissioner or the chair.

A vote on restoring net neutrality will almost assuredly go down party lines, making that fifth spot at the commission critical.

Biden has moved much slower than past presidents to fill out the FCC. Advocates and tech rights groups have been urging Biden to name a fifth commissioner for months.

I don’t need Starbucks, I have a Breville Barista Touch Espresso Maker

If you’re after coffeehouse quality brews made from the comfort of your own kitchen, and you’re willing to make an investment in achieving this magical dream, the Breville Barista Touch Espresso Maker may just be the machine you’ve been looking for. Check out everything you need to know about it in our in-depth review.

Former President Donald Trump announced that he was suing big tech companies like Facebook, Google, and Twitter, but experts are already predicting that the lawsuit won’t go very far.

Trump unveiled his lawsuit in a press conference, calling it “beautiful” and framing it as a way to fight back against his long-standing—but light on evidence—belief that social media companies have a bias against conservatives.

Trump naturally has a personal interest in fighting the companies. He was banned from Facebook, Twitter, and YouTube after posting on the platforms following the Capitol riot. Since being booted off the platforms, Trump’s reach online has plummeted.

As for the likelihood of his lawsuit succeeding, the general consensus seems to be that it is nothing more than a “stunt.”

“This lawsuit is a stunt and it’s unlikely to find traction in the courts,” Jameel Jaffer, executive director of the Knight First Amendment Institute at Columbia University, said in a statement.

The lawsuit’s likely purpose—an attempt to galvanize his base at a time where he’s struggled to get the same attention he did while in office—was on full display shortly after the announcement.

Fundraising emails were sent out asking people to contribute “any amount right now to show your support for President Trump’s lawsuit against Big Tech.”

“This is not a lawsuit. It’s a fundraising grift,” Evan Greer, the director of Fight for the Future, said in a statement. “While it’s silly to pretend that the moderation decisions of Big Tech don’t have a significant impact on free expression, the First Amendment enables private platforms to make exactly the kind of moderation decisions they wish to make as non-government entities. From a legal perspective, this lawsuit is likely to go nowhere.”

Twitter verified a number of bot accounts—raising questions about security

Questions have been raised over Twitter’s verification process after a handful of suspicious accounts were seen with blue checkmarks.

In a tweet thread on Sunday, Twitter user Conspirador Norteño, a data scientist focused on disinformation, highlighted six newly-created accounts that had all been verified.

While it’s common for malicious actors to hack into already-verified accounts, the six users had all been created just 26 days ago. Not only that, the accounts shared nearly all the same followers and had not made a single tweet.

The profile pictures for two of the accounts even appeared to be stock images, while others seem to have been created with artificial intelligence. Dozens of the accounts’ followers looked the same as well, using computer-generated photos of humans and cats for their profiles.

Although the majority of the accounts and their followers had not tweeted, several had. Conspirador Norteño noted that of the handful that had made tweets, nearly all of the content was related to automated Korean spam.

It remains unclear how the accounts were able to get verified, let alone so quickly. The Daily Dot reached out to Twitter to inquire about the accounts but did not receive a reply by press time.

EDITORS NOTE: In a statement to the Daily Dot late Monday, Twitter confirmed that it had inadvertently verified the “inauthentic” accounts.

“We mistakenly approved the verification applications of a small number of inauthentic (fake) accounts.,” a Twitter spokesperson said. “We have now permanently suspended the accounts in question, and removed their verified badge, under our platform manipulation and spam policy.”