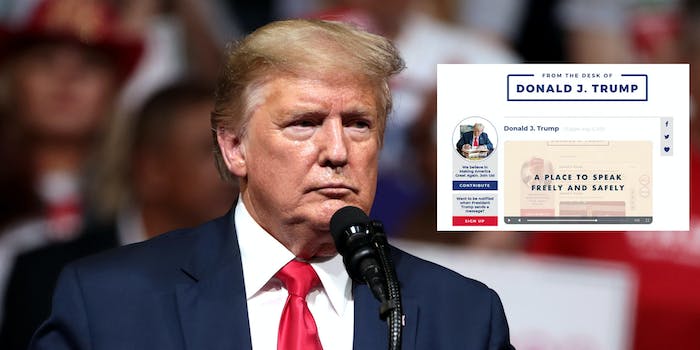 Maybe he should have tried pivoting to video.

Former President Donald Trump’s blog has joined countless other personal blogs in the history of the internet that were active for a short time, got no traffic, and eventually fell by the wayside.

Trump’s brief foray into blogging lasted about a month and, by most reports, was a massive failure in connecting him to his fans.

The blog, “From the Desk of Donald J. Trump” launched last month and was essentially a way for him to try and do what he did on social media before he was banned following the Capitol riot: post his daily musings.

But it was quickly apparent that his own blog wasn’t the same megaphone he had on social media. The Washington Post reported last month that posts from the blog had been shared fewer than 2,000 times a day on Facebook shortly after it launched.

Meanwhile, just a week after launching, NBC News reported that the blog attracted just over 212,000 engagements—such as backlinks or interactions on social media.

In light of getting a vastly smaller number of interactions than what Trump was used to on platforms like Twitter and Facebook, the blog has been shut down.

CNBC reports “From the Desk of Donald J. Trump” is now permanently shuttering. Trump’s senior aide Jason Miller told the news outlet that it was “just auxiliary to the broader efforts we have and are working on.”

Links to the blog now redirect users to a page on Trump’s site asking for them to sign up to get “exclusive updates” from the former president.

The old posts from Trump’s blog now appear under the “news” tab of his website and are treated as “statements” from him.

Trump’s team has been mulling the idea of launching his own social media in the wake of being banned—and his blog clearly wasn’t that. But perhaps the “broader efforts” Miller mentioned to CNBC will be his long-prophesied social network platform.